Reganosa will operate and maintain the first LNG terminal in Sardinia (Italy), whose construction in the port of Oristano, on the west of the island, is in its final phase. In this way, the Spanish company will become the only in the world which manages up to three third-party LNG plants, in addition to the one it owns in Mugardos (A Coruña – Spain). 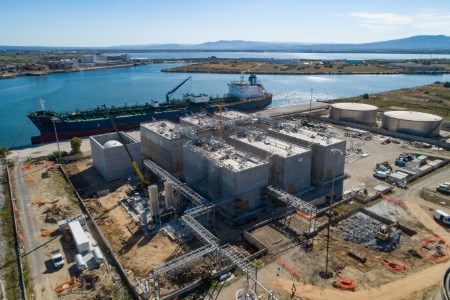 Higas S.r.l. has awarded Reganosa the operations and comprehensive maintenance contract of the new terminal of importation, storage, and distribution in Oristano. The facilities are expected to be operational in the first half of 2021.

The Higas terminal includes a jetty capable of receiving LNG vessel up to 20 000 m3, an unloading arm, six horizontal cryogenic holding tanks (1500 m3 each), two LNG truck loading bays, and a natural gas captive power generation system. The terminal can load in excess of 8000 LNG trucks each year (some 180 000 t), for subsequent distribution to smaller satellite stations across the island.

Sardinia currently lacks a system of access to natural gas and only a small number of industrial customers receive LNG by truck which is brought to the island by ferry. The Higas terminal will provide Sardinia with LNG supply that is clean, affordable and reliable.

This process underpins the international expansion process of Reganosa, initiated in 2015 with the creation of Reganosa Services to provide the knowledge and experience of the group in studies, project designs, consulting, engineering, and asset management.

Over the last four-year period, the group has provided various services in 15 countries on four continents: Brazil, Canada, Chile, Colombia, Germany, Spain, France, Malta, Ghana, Mozambique, India, Japan, Kuwait, Pakistan, and Italy. With its involvement in those territories, the group has covered all the phases of development of a project, from viability studies to commercial operation.

While growing in Spain and diversifying its business, opting for a green and digital economy, Reganosa has strengthened over the last few months its internationalisation process. Shortly, it will also begin the operation and maintenance of a single plant in Sub-Saharan Africa.

In accordance with that process of sustained growth and constant adaptation, Reganosa has nearly tripled its staff in the last five years. The company has also established itself as an international benchmark in the O&M of third-party energy infrastructures.

The group either already manages or will manage imminently three kinds of LNG terminals: floating, that of Tema (Ghana); onshore, those of Mugardos and Oristano; and mixed, that of Delimara (Malta). These facilities have, moreover, a wide range of storage: from 9000 - 300 000 m3.

With that of Sardinia, Reganosa will also make its international debut in the segment of small scale solutions. This has been made possible thanks to Higas, whose shareholding belongs to two Italian partners (Gas & Hit and CPL Concordia) and to Avenir LNG.

Read the article online at: https://www.lngindustry.com/liquid-natural-gas/22022021/reganosa-wins-contract-for-lng-terminal-in-sardinia/