DEME has announced that it has launched the Living Stone – the world’s most advanced subsea cable installation/trenching vessel. The ship features dual-fuel engines, using LNG as its primary fuel, and features dynamic positioning 3 (DP3) capability.

The vessel was launched at the LaNaval shipyard near Bilbao, Spain. The ceremony was initiated by Sarah Tommelein – the spouse of Bart Tommelein, the Vice-Minister-President of the Government of Flanders and Flemish Minister for Energy.

The Living Stone has two turntables below deck, which each have a cable capacity of 5000 t. Together, the turntables are capable of carrying and transporting over 200 km of cable that can be installed in a single trip. The vessel also features 3500 m2 of deck space, facilitating a cable handling system with reliable and innovative cable handling tools for cable ends, connections and cable protection systems. In addition to this, the vessel is able to be equipped with a third carrousel above deck with an extra load capacity of 2000 t and a 600 t crane. Tideway developed a system to install cranes faster and more efficiently in longer lengths and with fewer offshore joints than other cable installation vessels.

Read the article online at: https://www.lngindustry.com/small-scale-lng/19092016/deme-launches-lng-fuelled-cable-installation-trenching-vessel-3064/ 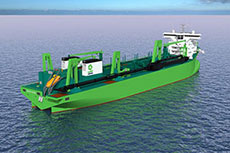 DEME has announced that it has ordered a new trailing suction hopper dredger – the Bonny River – which will be powered by LNG dual-fuel engines. 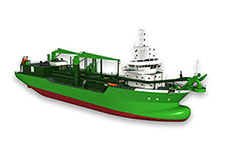 DEME has ordered two new trailing suction hopper dredgers, which will be equipped with dual-fuel engines.