Ferus Smit has announced that it has delivered the second LNG-powered cement tanker to the JT Cement joint venture (JV). The JV consists of Erik Thun AB and Norway’s KG Jebsen Cement. Immediately following its delivery, The M.V. Ireland left the harbour of Delfzijl, the Netherlands to set off for its first commercial voyage.

Both vessels are the first dry cargo ships that feature an LNG-fuelled propulsion system, with LNG tanks incorporated inside of the hull. The vessels’ design includes a pressurised LNG tank situated at the front of the ship.

Ireland’s cement cargo system features a fully automated cement loading and unloading system, which is based on the fluidisation of cement through the use of compressed air. The cement is then capable of being both loaded and unloaded via enclosed through – and dust-free – pipes.

Read the article online at: https://www.lngindustry.com/small-scale-lng/09062016/ferus-smit-delivers-second-lng-powered-cement-tanker-2579/ 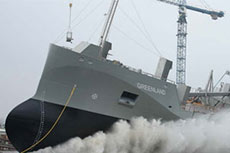 Ferus Smit has announced that it has successfully launched the M.V. Greenland – an LNG-fuelled cement tanker.