Acting via its wholly-owned subsidiary, GNVert, ENGIE has announced that is cooperating with La Poste Group to develop a number of eco-mobility projects that utilise natural gas and hydrogen. One such project involves the design of refuelling stations for particular La Poste vehicle natural gas (VNG)/bioVNG and hydrogen vehicles. The cooperation agreement was signed by the CEO of La Poste group, Philippe Wahl, and the CEO of ENGIE, Isabelle Kocher.

The European scale agreement covers a period of five years. La Poste is reportedly trying to prioritise the large scale use of vehicles with low CO2 emissions. The agreement will also allow ENGIE – via GNVert – to continue developing the promising alternative fuels market. The agreement also sets out certain conditions that are necessary for the development of biomethane fuel (bioVNG).

Concomitantly, both parties will cooperate on an awareness campaign and coordinated communications on eco-mobility in conjunction with the energy transition.

Read the article online at: https://www.lngindustry.com/small-scale-lng/06072016/engie-and-la-poste-to-cooperate-on-natural-gas-fuelled-vehicles-2704/ 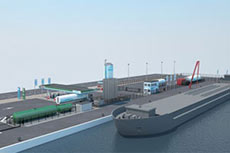 ENGIE has announced that it has signed a 30-year concession agreement with the Antwerp Port Authority for the development of an alternative energy hub, which will involve LNG vehicle filling stations and bunkering facilities.

ENGIE has announced that Isabelle Kocher, who was appointed Deputy CEO and COO in November 2014, will become CEO.

ENGIE has entered into an LNG partnership agreement with Kansai Electric.