According to Reuters, Egyptian Natural Gas Holding Co. (EGAS) has launched a tender to rent another floating storage and regasification unit (FSRU). The FSRU will be EGAS’ third such vessel and will have capacity of 750 million ft3/d.

Reuters reports that a company official confirmed that the tender will close within a two week period.

In October 2015, Reuters reported that Egypt was looking to rent a third FSRU by either late 2016 or 2017 in order to mitigate energy shortages. Its first two rentals were delivered in April and September of that year.

In October, the head of EGAS, Khaled Abdel Badie, said that the third FSRU would be used to increase electricity generation and to meet heavy industry’s gas requirements.

Read the article online at: https://www.lngindustry.com/liquid-natural-gas/29062016/egas-launches-tender-for-third-fsru-2672/

Reuters reports that Egypt is looking to rent a third FSRU in order to meet the needs of industry and to increase electricity generation.

The Egyptian Natural Gas Holding Company has selected BW to provide LNG regasification services for its project in Egypt. 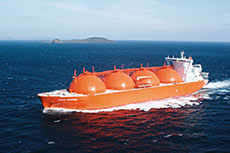 In a bid to import more LNG, Egyptian company EGAS has gone to tender over the construction of an floating storage and regasification unit.