OLT Offshore LNG Toscana S.p.A (OLT) is an international company operating in the energy sector; specifically, it offers LNG regasification services from its floating terminal FSRU Toscana. The terminal, anchored permanently 22 km off the Tuscany coast between Livorno and Pisa, contributes significantly to the Italian Gas System. With a maximum authorised regasification capacity of 3.75 billion m3/y, it covers approximately 5% of the domestic requirement, guaranteeing the security and diversification of the country’s energy supply. Thanks to its innovative characteristics and extreme flexibility, the Ministry of Economic Development (MiSE) has awarded the terminal strategic infrastructure status. 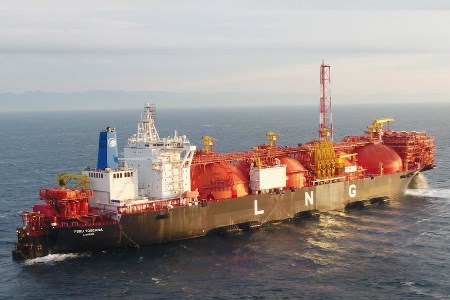 The partners that hold shareholdings in OLT include: Snam – one of the world’s leading energy infrastructure operators and one of the largest Italian listed companies in terms of market capitalisation – holding 49.07%; First Sentier Investors – a global asset manager with over €8 billion of unlisted infrastructure capital under management – holding 48.24%; and Golar LNG – an LNG shipping company engaged in the acquisition, operation and chartering of LNG carriers and FSRUs, holding 2.69%.

In addition to the regasification activity, OLT is about to offer a new service: the small scale LNG service.

After obtaining – in October 2020 – the authorisation from the Ministry of Economic Development, in agreement with the Ministry of Infrastructures and Transport and the Tuscany Region, to provide the discharge of LNG on small scale LNG carriers, the Company has announced the next step towards the finalisation of the small scale LNG project.

Starting from 24 February 2021, it will be possible to consult, on the website of the company, the proposal to amend the Regasification Code, that introduces the new service.

These modifications amend the previous version of the Code approved by ARERA with resolution 85/2020/R/Gas of 24 March 2020 and introduce the flexibility services referred to in Article 12 of the TIRG (Integrated text of the provisions on guarantees of free access to the regasification service of LNG). Finally, with this update, the amendments to the TIRG envisaged by Resolution 576/2020/R/Gas are transposed.

Maurizio Zangrandi, Managing Director of OLT, said: “The Company has been working for some time on the small scale LNG project. In order to optimise the timing, the detailed design was developed in parallel with the authorisation process and then the tenders for the purchase of the necessary components and works were launched. The launch of the small scale LNG service is scheduled for the end of 2021. OLT will be able to load small LNG carriers up to 120 m in length correspondent to a small scale LNG carrier average of 7500 m3 of cargo capacity. With reference to the consultation to amend the Regasification Code, all interested parties will be able to submit their comments by 12 April 2021.”

Giovanni Giorgi, Managing Director of the Company, added: “OLT will be the first regasification terminal capable of providing small scale services in Italy. This new activity adds an important piece to energy logistics, allowing to complete the supply chain that permits the use of LNG as a sustainable fuel and capable of reducing polluting and climate-changing emissions in heavy land and sea transport, as well as for industrial and civil uses in areas not served by the national gas transport network.”

OLT’s small scale LNG project will also enable the country to be competitive in one of the markets with the highest growth rate, as it has been experienced in northern European countries, thanks to the introduction of a sulfur emission-controlled area (SECA) in the North Sea, the Channel and in the Baltic Sea, with the support of European funds. In Europe countries such as Spain, France, Belgium, Holland and Scandinavia have been providing small scale LNG services from their LNG terminals for many years, allowing the loading of both trucks that supply gas stations for LNG-fuelled vehicles and small LNG carriers that can directly bunker other ships with dual fuel or exclusively LNG engines, thus in compliance with the strict International Maritime Organization (IMO) regulation on nitrogen oxide and sulfur emissions which entered into force as early as 1 January 2020. LNG as a fuel plays a fundamental role for the energy transition that will lead to zero emission fuels by 2050, such as hydrogen. In 2020, the growth of the small scale LNG market recorded an increase of 26% in Italy, despite the pandemic that impacted on all markets.

Considering only the LNG gas stations in Italy, the country has gone from six distributors in 2016 to 94 at the end of 2020 (+1466% in four years), confirming the country as the first in Europe for the number of LNG gas stations available. Looking at the maritime sector worldwide, in 2019 there were six small LNG carriers used to supply coastal deposits located in ports and to supply other ships, and they will reach 25 units by the end of this year. This remarkable development has enabled, for example, the Zeebrugge terminal in Belgium to carry out 21 small LNG carrier reload operations for bunkering purposes and other small scale LNG services as early as 2019.

The increase in the sector is mainly due to the spread of hybrid or exclusively LNG-fuelled engines that is occurring in the maritime sector, thanks to both the greater attention to the environment and the economic competition of LNG towards low-sulfur fuels. The kind of vessels more frequently retrofitted are the Ro/Ro cargo ships, supply vessels (such as tugs and dredgers), and new cruise ships – a sector where, due to the areas in which they sail, the attention to the environment is very high. In addition to the two cruise ships already operational in the North Sea and the Mediterranean, 12 new ships have already been ordered and will become operational in the coming years. In this context, it is noted that, at the end of 2020, in the harbour of La Spezia the first LNG bunkering operation to the cruise ship Costa Smeralda was operated by a small LNG carrier.

Since the beginning of the operations, in 2013, OLT has been working to maximise the use of the terminal by increasingly improving its flexibility in the services offered, adapting them to the market conditions and trying to meet the requests of the market operators.

LNG was received from the US, Algeria, Norway, Egypt, Trinidad and Tobago, Qatar, Nigeria, Equatorial Guinea, Peru and Cameroon, as well as cargoes from other European terminals with volumes always increasing. For example, in 2017, 989 billion m3 of natural gas were imported, 1.186 billion m3 in 2018, and in 2019 OLT reached the maximum authorised capacity of the terminal of 3.75 billion m3. The high utilisation rate trend is also confirmed for 2020 and 2021.

Read the article online at: https://www.lngindustry.com/liquid-natural-gas/26022021/olts-small-scale-lng-project-seeks-to-amend-regasification-code/