Siem Car Carriers has added a second super-eco, LNG-fuelled PCTC vessel to its fleet to join its sister ship as the world’s largest vessels of their kind. 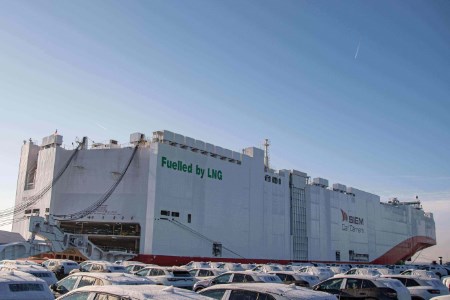 The Siem Aristotle, is currently on its maiden voyage from Emden, Germany, to North America. The ship’s first bunkering commenced, taking on over 800 t of eco-friendly LNG fuel. Nearly 4800 cars for VKWL were loaded, bound for Canada, USA, and Mexico.

The vessel is 200 m long and 38 m wide, with a maximum draft of 10 m and its sailing speed of up to 19 nautical mph. The Aristotle recently made port calls in Halifax, NS, Baltimore MD, and Vera Cruz, MX.

The vessel will be managed by SCC’s sister company – Siem Ship Management based in Gdynia, Poland. While in Emden, the experienced management and crew took all precautions necessary to ensure safe bunkering of LNG for the vessel.

Read the article online at: https://www.lngindustry.com/liquid-natural-gas/25012021/siem-car-carriers-adds-second-lng-fuelled-pctc/