The Greek company Gastrade SA has announced the signing of the agreement for the acquisition of 20% of its share capital by the Bulgarian company BULGARTRANSGAZ EAD (BTG), operator of the National Natural Gas System of Bulgaria. 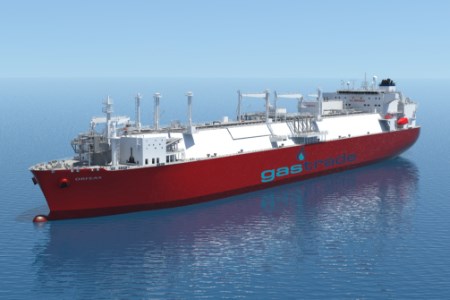 The agreement was signed today in Athens by the Founding Shareholder & Chairman of the Board of Directors of Gastrade, Mrs. Elmina Kopelouzou and the CEO of Bulgartransgaz, Mr. Vladimir Malinov in the presence of the Prime Ministers of the Hellenic Republic and the Republic of Bulgaria, Mr. Kyriakos Mitsotakis and Mr. Boyko Borissov.

GasLog was represented by the CEO of the company, Mr. Paul Wogan and DEPA Commercial by the Chairman of the Board, Mr. Ioannis Papadopoulos and the CEO Mr. Konstantinos Xifaras.

Gastrade is developing the LNG floating storage and regasification unit (FSRU) offshore Alexandroupolis, which will be a new, independent energy gateway for the markets of Southeastern and Central Europe.

The Station will be located 17.6 km southwest of the port of Alexandroupolis and will have an LNG storage capacity of 170 000 m3 and a natural gas supply capacity that will exceed 5.5 billion m3/y. The floating unit will be connected to the National Natural Gas System of Greece via a 28 km long pipeline, through which the regasified LNG will be transmitted to the markets of Greece, Bulgaria and the wider region, from Romania, Serbia and North Macedonia to Hungary, Moldova and Ukraine.

This is a European Project of Common Interest (PCI - EU Regulation 347/2013), a priority project of the European Union, which strengthens security of supply, diversifies sources and routes of energy supply, enhances competition and supports the establishment of a Natural Gas trading hub in the wider region of southeastern Europe, bearing obvious benefits for all final consumers.

The project supports and completes the Greece-Bulgaria interconnector (IGB) involving Bulgarian Energy Holding, the parent company of Bulgartransgaz, and DEPA, through which natural gas will be channelled from the LNG Terminal in Alexandroupolis to Bulgaria and from there to the other markets of Southeast Europe.

The participation in the project of Bulgartransgaz, the public company that manages and develops the natural gas network and infrastructure in the neighbouring country, falls within Bulgaria’s updated energy strategy and its decision to gain direct access to LNG through the Alexandroupolis terminal.

At the same time, it is a proof of the strategic role of the project in Southeast Europe and will have a key role in the penetration of LNG in the region, as well as in enhancing energy liquidity in the its markets.

“We welcome Bulgartransgaz to the project. Today's signing of the agreement is the conclusion of our long-standing discussions at all levels of the Bulgarian energy administration. The participation of Bulgartransgaz in the project is of particular importance as it demonstrates the regional profile of the project and its importance for the markets of Southeast Europe. It is also a significant international investment in our country and we are proud to be part to it. We are well acquainted with our new partners and we are confident that we will enjoy an excellent co-operation in promoting energy development in our region.”

Bulgartransgaz’s CEO Mr. Vladimir Malinov underlined: “The investment that Bulgartransgaz made today in the LNG project is of strategic importance for the development of the natural gas market in Bulgaria and the region. This will guarantee liquidity of the gas market and competitive prices for the customers. The LNG terminal in Alexandroupis complements the realisation of the concept of the Bulgarian government - Balkan Gas Hub.”

The LNG Terminal in Alexandroupolis is expected to be operational in early 2023.

The agreement is subject to the approval of the competent authorities.

Read the article online at: https://www.lngindustry.com/liquid-natural-gas/24082020/bulgartransgaz-to-participate-in-alexandroupolis-lng-terminal/

Under the 20-year Sales and Purchase Agreement, China Gas will purchase 1.0 million tpy of LNG from NextDecade’s Rio Grande LNG export project in Brownsville, Texas, US.