Nakilat has assumed the technical ship management and operations of the floating storage and regasification unit (FSRU) Exquisite from Excelerate Technical Management (ETM). 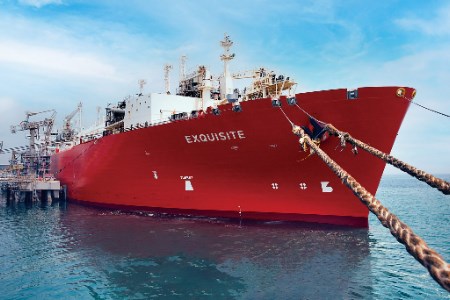 The FSRU is jointly owned by Nakilat and Excelerate Energy L.P. through a joint venture established in 2018. This is the first FSRU to be managed in-house by Nakilat Shipping Qatar Limited (NSQL), bringing NSQL’s managed fleet to 27 vessels, comprising of 22 LNG, four LPG carriers, and one FSRU.

The FSRU Exquisite has a cargo carrying capacity of 150 900 m3 and a peak regasification rate of 690 million ft3/d. To date, the vessel has received more than 330 cargos of LNG or approximately 21 million t since it started operations in 2015. The FSRU built in South Korea by Daewoo Shipbuilding & Marine Engineering was delivered in 2009, and has been in service ever since.

Nakilat CEO Abdullah Al Sulaiti said: “We are immensely proud of this major milestone in successfully transitioning the first-ever FSRU to Nakilat’s in-house shipping management, despite the challenges of the ongoing global pandemic and in conjunction with Qatar National Day. Nakilat has been meticulously preparing to take on greater ship management responsibilities over the past years, building capacity and strengthening in-house capabilities in order to grow sustainably and steer our vision forward to become a global leader and provider of choice for energy transportation and maritime services.”

Al Sulaiti added: “The safe completion of the second phase fleet management transition involving seven LNG carriers, the delivery of a MEGI LNG new-build, as well as the FSRU Exquisite transition to NSQL-management within less than a year – bears testament to our commitment in maintaining our leadership in energy transportation. I would like to extend my sincere appreciation to everyone in making these vessel transitions safe and successful, demonstrating all the hard work and careful preparations by all parties involved.”

Excelerate President and CEO Steven Kobos said: “As the most utilised FSRU in the world, Exquisite provides critical, clean energy to Pakistan, much of which is sourced from Qatar. We are proud to work with our strategic partners Nakilat on this important milestone. We are confident in NSQL’s capabilities as first-class operators to ensure the continued safe and reliable delivery of natural gas.”

Read the article online at: https://www.lngindustry.com/liquid-natural-gas/23122020/nakilat-transitions-first-fsru-to-in-house-management/