The Ternsund will largely operate in northern European waters, and will comply with SOx regulations in the sulfur emission control areas (SECAs). Furthermore, the engines ensure that the vessel complies with IMO Tier III NOx limits in gas operation without extra exhaust gas after-treatment.

The vessel is the result of the EU co-funded project, ‘Into the Future – Baltic SO2lution’. This project focuses on cooperation between Terntank, Wärtsilä, WinGD, North European Oil Trade (NEOT) and Wega Enviro, and promotes environmentally friendly and efficient shipping the Baltic Sea.

Read the article online at: https://www.lngindustry.com/liquid-natural-gas/23062016/lng-powered-chemical-tanker-passes-sea-trials-2651/ 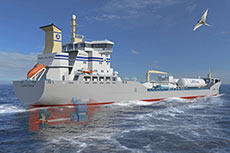