Qatargas Operating Company Limited has announced the delivery of the first cargo of LNG on a Q-Max LNG carrier to the Tianjin LNG Receiving Terminal in China. 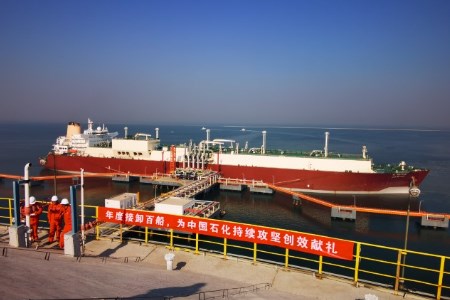 The cargo aboard the Qatargas-chartered LNG vessel Al Mafyar was loaded at Ras Laffan on 21 October 2020 and delivered to the Tianjin Terminal, located in the northern port city of Tianjin, near Beijing, on 10 November 2020.

This is the first cargo discharge operation by Qatargas to this LNG terminal involving a Q-Max LNG carrier. The Q-Max is the largest LNG vessel class in the world and has the ability to deliver 266 000 m3 of LNG.

The Tianjin LNG Receiving Terminal is owned and operated by the China Petroleum & Chemical Corporation (Sinopec), one of China’s largest state-owned enterprises. The terminal has a capacity of 6 million tpy and is currently being expanded to handle up to 10.8 million tpy by 2022. The Tianjin LNG receiving terminal received its first LNG cargo in February 2018 and has received more than 200 LNG cargoes so far.

Read the article online at: https://www.lngindustry.com/liquid-natural-gas/18112020/qatargas-delivers-first-q-max-lng-cargo-to-tianjin-terminal/