Ole R. Hvalbye, Rystad Energy, Norway, provides a detailed analysis of the latest trends in the US LNG industry. 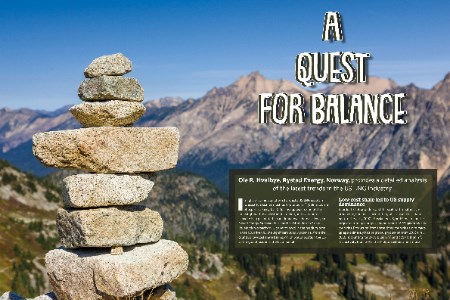 In light of current sanctioned projects, US LNG supply is forecast to reach as much as 146 billion m3 (108 million t) of export capacity by 2026. This represents one of the largest global LNG investments to date, and even more capacity is expected to be sanctioned over the next few years. Rystad Energy forecasts that another 74 million t of new liquefaction capacity will be sanctioned in the medium-term in the US, driven by the significant supply potential from the country’s low-cost shale basins, which would position the US as the global leader in the LNG market.

In order to better understand the scale of US natural gas production, one must look at the global gas market. Dating back to the early 2000s, Russia, the US, and Canada had the largest natural gas output among a total of 93 gas-producing countries. Production from these three countries alone made up approximately half of global production from 2000 until 2010, accounting for 2478 billion m3 and 3214 billion m3, respectively. From 2010, the Middle East became a more central figure in the global gas market, with Iran, Qatar, and Saudi Arabia producing a total of 493 billion m3 in 2019. In the Asia-Pacific region (APAC), specifically China and Australia, gas production increased by 107% and 164%, respectively, between 2010 and 2019.

In 2012, the US stole the throne from Russia when it became the largest natural gas producer in the world. And by 2019, total output had reached 945 billion m3 – a staggering 23% of global production. This increased market share was primarily the consequence of the shale gas revolution, which fuelled a steep increase in production after 2010 and resulted in total US gas dominance. Going forward, Rystad Energy forecasts only minor interruptions to this trend, estimating that US production will reach 1160 billion m3 in 2040 (approximately 24% of global output), with as much as 1023 billion m3 (approximately 88% of total output) coming from shale gas.

Read the article online at: https://www.lngindustry.com/liquid-natural-gas/17062020/a-quest-for-balance/

Under the SPA, INEOS has agreed to purchase approximately 1.4 million tpy of LNG delivered free-on-board from the proposed Phase 1 liquefaction project for a term of 20 years.