BC Ferries has announced that it has awarded a CAN$140 million contract to Remontowa Ship Repair Yard S.A. of Gdansk, Poland. The shipyard will conduct the Spirit Class mid-life upgrades (MLUs) for the Spirit of British Columbia and the Spirit of Vancouver Island. This will include converting both vessels to dual-fuel, making them capable of operating on LNG. Work will commence in 2017, and is expected to be complete by 2019. BC Ferries plans to operate the vessels for another 25 years on the Tsawwassen-Swartz Bay route.

“The conversion of the two largest ships in the fleet along with the three new dual-fuel Salish Class vessels currently under construction will go a long way to help with fare affordability for our customers as LNG costs significantly less than marine diesel.

“In addition to the financial benefits of LNG, BC Ferries is committed to converting to more environmentally friendly fuel sources to improve our environmental footprint.

“By utilising LNG to fuel the Spirit Class vessels, we expect to reduce CO2 emissions by 12 000 tpy, which is the equivalent of taking approximately 2500 vehicles off the road per year.”

To make the project financially viable, BC Ferries sought funding under incentive programmes, in order to help offset any capital costs associated with using LNG. An agreement was signed by the company (subject to particular conditions) to receive up to CAN$10 million in contributions from FortisBC Energy Inc. as part of the Natural Gas Transportation incentive funding. The capital cost of converting BC Ferries’ two Spirit Class vessels to dual-fuel will be partially offset by this funding.

Read the article online at: https://www.lngindustry.com/small-scale-lng/29032016/two-of-bc-ferries-vessels-to-be-converted-to-lng-dual-fuel-2192/

BC Ferries has announced that it has named its new Salish-Class vessel, Salish Orca, which will have an LNG dual-fuel engine.

BC Ferries has shortlisted three shipyards for mid-life upgrades of its largest, Spirit Class vessels, although the project is deferred for a year. 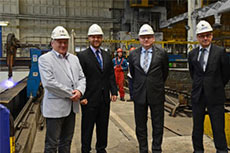 BC Ferries has begun the construction of the third and final LNG-fuelled intermediate class ferry of its most recent project.