Philly Shipyard Inc. (PSI) has announced that it has held a ceremonial keel laying for the third product tanker in a four-tanker order for American Petroleum Tankers (APT). PSI is a wholly owned US subsidiary of Philly Shipyard ASA, whilst APT is a subsidiary of Kinder Morgan Inc. In keeping with tradition, coins were placed onto one of the keel blocks before the 650 t unit was lowered into place in the dry dock.

The tanker is scheduled for completion in 2017. It will be 50 000 dwt, 600 ft long, and able to carry 50 000 t of crude oil or refined petroleum products. All four of the tankers in the order are based on a proven Hyundai Mipo Dockyards (HMD) design, and will be built with consideration of the use of LNG propulsion in the future.

The President and CEO of Philly Shipyard, Steinar Nerbovik, said: “Today we celebrate our 15 new shipbuilders and the 27th keel laid in our seventeen year history. Both will set the standard for shipbuilding activities well into our future. Congratulations to our graduates and to the men and women of Philly Shipyard for another milestone progressing toward our ongoing goal of being the premier US commercial shipyard.”

Read the article online at: https://www.lngindustry.com/small-scale-lng/22092016/psi-holds-keel-laying-ceremony-for-third-product-tanker-for-apt-3083/ 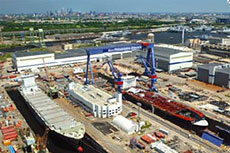 Philly Shipyard Inc. has announced that it has laid the keel for the second of four product tankers for American Petroleum Tankers.

Philly Shipyard Inc. has held a keel laying ceremony for a new product tanker that is being constructed for American Petroleum Tankers – a subsidiary of Kinder Morgan Inc.