Both stations will feature a single LNG refuelling system, which will be able to supply heavy goods vehicles (HGVs) 24 hours a day.

Calor Sales Manager for LNG Transportation, Mark Gilks, said: “With the potential for offering significant cost and CO2 reductions, not to mention clean-air benefits, LNG is enjoying increased popularity as a fuel for HGVs and shipping.

“Calor is already committed strongly to this sector and operates the largest publically accessible LNG road refuelling network across the UK.

“This latest deal strengthens our existing relationship with Moto, as we have already launched LNG refuelling stations at Moto’s Aust, Bristol and Lymm service stations.”

Read the article online at: https://www.lngindustry.com/small-scale-lng/20072016/calor-and-moto-hospitality-to-open-two-lng-refuelling-stations-in-the-uk-2786/ 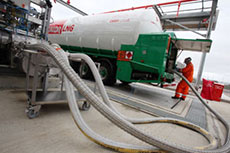 Calor has announced that it has used the Isle of Grain LNG terminal in Kent, UK, to fill its LNG road tankers.