Shipyard Constructions Hoogezand Nieuwbouw (SCHN) has announced that the LNG-powered hopper barge, Greenports 1, is ready for sea trials. The vessel was launched on 31 March 2016, and has been built for Bremenports, which is a German government agency.

The vessel will carry silt dredged from the harbour basins in Bremerhaven to the disposal facility in Bremen-Seehausen on a regular basis.

Read the article online at: https://www.lngindustry.com/small-scale-lng/18072016/lng-powered-hopper-barge-ready-for-sea-trials-2766/ 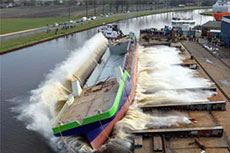 An LNG-powered hopper barge has been launched in the Netherlands.