According to Reuters, a top executive at Indian Oil Corp. (IOC) has said that the company will continue to import a minimum of two cargoes of LNG each month after the Dahej import terminal expansion.

The terminal is located on the west coast of India, and is operated by Petronet – the nation’s largest single LNG importer. The company increased the import capacity of the facility to 15 million tpy – an increase of 50%.

Read the article online at: https://www.lngindustry.com/regasification/31082016/indian-oil-corp-to-carry-on-importing-two-cargoes-of-lng-per-month-2980/

According to Reuters, Indian Oil Corp. is currently holding a tender to purchase two cargoes of LNG for delivery in October 2016. 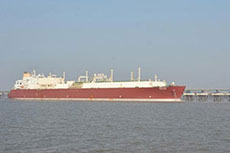 Petronet LNG has announced the arrival of the first Q-Max LNG vessel at the Dahej LNG terminal from Ras-Laffan, Qatar.

The state-owned Indian Oil Corp. has announced plans to lay 1175 km of natural gas pipelines from the proposed Ennore LNG terminal in Tamil Nadu, on the Bay of Bengal coastline.

A new report by RNCOS has projected that global LNG growth will be healthy up to 2030, and India will be a major growth market for LNG.