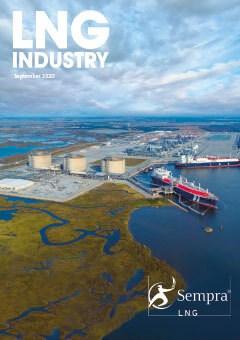 In recent days, the global LNG industry has appeared rather disconnected, when comparing East with West. Over to the West, focusing on the US, Hurricane Laura swept through Louisiana – a damaging Category 4 Atlantic storm that was one of the strongest hurricanes to have made landfall in this US state. With hundreds of thousands of Louisianans without power and a scene of devastation left in the hurricane’s wake, several LNG facilities were also in danger.

Venture Global LNG, Inc.’s Calcasieu Pass LNG facility is currently under construction in Louisiana, however it managed to escape unscathed, reporting minimal impacts from the hurricane. Evidence of ingenious engineering, a design element of this facility is its perimeter wall and storm water pumping system, both proving capable and protecting the facility and all personnel.

Sempra LNG weathered the storm similarly. At Cameron LNG, the site of the proposed Port Arthur LNG project, teams conducted preliminary inspections that reported minor flooding and no catastrophic wind damage. Whilst full operations at Cameron LNG are yet to be restored, since thorough inspections still need to be undertaken, the minimal damage experienced is the best possible outcome for the company.

Looking East to the Asian continent – the focus of this issue’s detailed regional report starting on p.12 – the LNG sector has been active, with contracts handed out, plans devised for new terminals, and cargoes delivered. Following a tumultuous few months for the world, the flourishing LNG industry is a welcome sight.

Increasingly on the agenda when companies plan their futures and assess their financial results, is decarbonisation and low carbon targets, and the LNG sector is not detached from these goals.

LNG is frequently described as a clean fuel, due to the fact it produces the lowest levels of greenhouse gas emissions and air pollutants than those of other fossil fuels. Consequently, LNG is forecast to be increasingly utilised as companies strive to reduce their carbon footprints and emit less harmful emissions. One such example is Japan Petroleum Exploration Co., Ltd, which has this month completed construction of its No. 2 unit of the Fukushima natural gas power plant, which uses regasified LNG for fuel.

Regasification capacity under construction is projected to reach a 10 year high of 144 million tpy in 2020, according to energy consultancy Wood Mackenzie. Sticking with the positive moves in Asia, China is leading the regasification capacity additions, responsible for over one-third of the total capacity. However, the East and West is no longer split when noting the locations where new regas terminals are being constructed and where capacity is being increased.

Of particular importance this month is the separation of East and West when considering the gathering of LNG professionals at Gastech, once scheduled for Singapore and now a virtual experience – another repercussion of COVID-19. Whilst the delights of dim sum and noodle soup in one of Singapore’s famous hawker centres, and the remarkable spectacle of Gardens by the Bay would have been thoroughly enjoyed – plus the conference and exhibition, of course – LNG Industry looks forward to meeting you virtually this year, and, fingers crossed, in person in 2021.