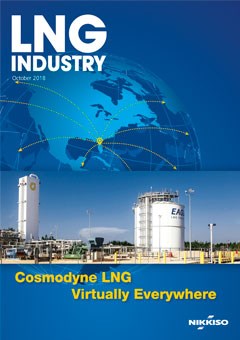 When I first joined LNG Industry magazine in 2015, it’s fair to say that the industry was not having the best of times. An incoming LNG supply glut, uncertainty surrounding demand requirements, and a low oil price all contributed to a somewhat negative atmosphere. Fast forward to 2018, and things appear to be on the up. Whilst some of those in the industry are understandably cautious, visitors to the recent Gastech conference in Barcelona, Spain, seemed to be positive about where the industry is heading.

With LNG demand forecast to increase significantly by the mid-2020s, it is clear that major players are looking to capitalise by developing new multi-billion dollar projects.

Indeed, at the beginning of October, the LNG Canada project was given the green light to commence construction, with first LNG expected before the middle of the next decade. Ben van Beurden, CEO of Royal Dutch Shell, said: “We believe LNG Canada is the right project, in the right place, at the right time.

“Supplying natural gas over the coming decades will be critical as the world transitions to a lower carbon energy system. Global LNG demand is expected to double by 2035 compared with today, with much of this growth coming from Asia where gas displaces coal.”1

Crucially, the development of this mega project in British Columbia, Canada, will not be an anomaly. It is in fact expected to signal the beginning of a number of approvals around the globe, according to one recent Reuters article.

Reuters quoted Saul Kavonic, an energy researcher at Credit Suisse, as saying: “LNG Canada’s FID [final investment decision] … (signals) the appetite to invest in LNG is back”, and Dulles Wang, Wood Mackenzie’s director of North America gas, as saying: “We believe 2019 could be the busiest year of LNG FIDs ever.”2

Exciting times ahead, then. Of course, this production growth is not limited to Canada alone. Companies around the world are seeking to develop their projects, including Tellurian, which is looking to commence construction on its US-based Driftwood LNG project in 1H19. The company is expecting operations to start on the 27.6 million tpy LNG project in 2023.

A host of other projects are also being planned or are under expansion in Africa and Russia, as well as in the Middle East. Qatar Petroleum, for instance, recently announced its decision to increase the capacity of Qatar’s LNG expansion project by adding a fourth liquefaction train. Once complete, Qatar Petroleum claims that the nation’s LNG production capacity will reach 110 million tpy. This is an increase of approximately 43% from its current production capacity of 77 million tpy.

Saad Sherida Al-Kaabi, President and CEO of Qatar Petroleum, said: “As we have announced last year, Qatar Petroleum has embarked on a project to develop additional gas from the North Field and build three new LNG mega trains. Based on the good results obtained through recent additional appraisal and testing, we have decided to add a fourth LNG mega train and include it in the on going front end engineering of the project.”3

If reports are to be believed that 2019 will indeed see a flurry of FIDs on major LNG projects, it will certainly be interesting to gauge the mood of the industry at next year’s Gastech conference in Houston, Texas. Of course, it can be foolish to make assumptions on anything, let alone the oil and gas industry, but a sense of optimism is hard to ignore. With demand expected to increase, and companies biting the bullet and kickstarting new projects, at the very least it’s fair to say that this next 12 months will be a very exciting time indeed for the industry.