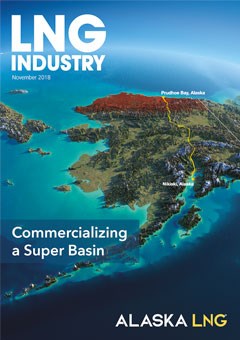 As I write this comment in late October, I am scared and confused. Walking leisurely up the high street to our offices in a quaint town in the south of England, I enjoyed the crisp Autumn air, and shielded my eyes from the bright, low sun.

That was until I saw something that made my stomach drop. An onslaught of red, green and gold forced its way upon my gaze. Fake pine trees. Spray-painted pinecones. Glittery baubles. Christmas decorations have already started to fill some of our local stores.

It’s only October and the build-up to the festive season has already started. Surely this is too soon? What of the other delights that the year has to offer? What of Halloween? What of Bonfire Night? The focus on Christmas seems to come earlier every year, to the detriment of other seasonal fun.

Personally, I think it’s time to give other festivities the attention they deserve.

In a similar vein, with so much focus on major exporters and importers, as well as the development of LNG megaprojects, it can be easy to lose sight of smaller, emerging markets. After all, LNG Canada has just been given the green light and, at the time of writing, Cheniere was reportedly looking to commission its first LNG cargo from the Corpus Christi terminal this November.1 Nevertheless, it is important to keep a watchful eye on smaller players in the LNG market.

For instance, according to Reuters, the Philippines has issued a shortlist of three different groups to construct and operate the country’s first LNG import terminal.2 At the time of writing, the country was reportedly looking to make a final decision this November.

According to the article, the decision to develop an LNG import terminal was taken as the country is expecting its domestic gas supplies from the Malampaya field to be completely depleted in 2024. Naturally, the country is therefore looking to LNG to fill this hole in energy demand.

It is not just the Philippines that is looking to take its first steps into the LNG market, however.

In late August this year, operations finally began at Bangladesh’s first LNG terminal; in this case, a floating storage and regasification unit (FSRU).3 Similarly to the Philippines, this import terminal has been implemented in order to offset declining domestic gas production.

One need only look at the ‘15 Facts’ section of this magazine (p. 56) to see that a spate of other projects in emerging markets are being developed as we speak. Indeed, Southeast Asia’s first LNG bunkering vessel is currently under construction; and, by 2019, Jamaica’s primary energy source will be LNG.4

If nothing else, this shows the rate at which the LNG industry is developing. In a relatively short period of time, the industry has gone from a niche sector into an established, global force. In a world where emissions regulations are becoming increasingly stringent, it seems that the growth of the industry is not set to slow down any time soon.

So, while LNG Canada and other megaprojects take the headlines, let’s also try to enjoy some of the smaller things.