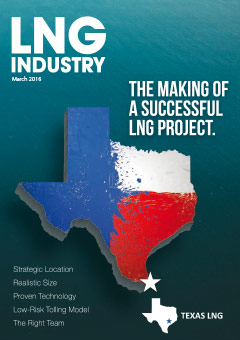 As the LNG industry prepares to assemble at LNG 18 in Perth, Australia, it is the US LNG market that is stealing the headlines. In late February 2016, Cheniere Energy finally announced that the first shipment of LNG had set sail from its Sabine Pass liquefaction terminal in Louisiana. This shipment marks the arrival of a major new player in the LNG industry; a player that would have once been unimaginable to LNG project proponents in Australia.

Four new projects are due to start production down under by the end of 2017, adding approximately 37 million tpy of LNG to the global market. At the time of writing, first production from Chevron’s Gorgon LNG project was said to be imminent. The timing for this project – the world’s most expensive (US$54 billion) – is somewhat unfortunate. In addition to the arrival of US shale gas to an already oversupplied market, LNG prices have fallen sharply and demand is weakening.

Evidence of the rough road ahead for Australian projects could be seen in Santos’ full year results for 2015. The operator of the Gladstone LNG (GLNG) project, which shipped its first cargo in October 2015, reported a staggering loss of AUS$2.7 billion for the 12 months to December 2015. Santos said that the loss reflected lower oil prices during the period. Its rival, Woodside Petroleum, also attributed its 99% drop in net profit after tax for 2015 to the global fall in oil prices.

While operators of these new projects would have certainly foreseen more favourable market conditions upon launch – and would have hoped to keep escalating costs under control during the construction phase – it is important to remember that Australia is playing the long game. The projects have been developed with an average life span of 40 years, and have long offtake agreements in place based on oil-indexed pricing, which will eventually start to climb (the International Energy Agency expects to see a gradual rise in the price of oil to US$80/bbl by 2020).1

What’s more, the demand outlook for natural gas remains very promising. In its 2016 Energy Outlook, BP notes that gas is the fastest growing fossil fuel.2 BP expects LNG’s share of world demand to rise from 10% in 2014 to 15% in 2035, by which time LNG will surpass pipeline imports as the dominant form of traded gas. BP also said that it does not expect the recent weakness in gas consumption to persist, as strong supply growth and stronger environmental policies will allow gas to compete with coal in Europe, Asia and North America.

In this issue of LNG Industry, Geoffrey Cann, Deloitte Australia’s National Director, Oil and Gas, takes a look at some of the critical challenges facing Australia as it readies itself to become the world’s largest LNG exporter (starting on p. 12). As well as outlining the immediate agenda for the country’s LNG industry over the next 24 months, Cann takes a look at the future direction of the Australian LNG sector. He believes that shortly after the current wave of projects have been completed, attention should turn to the many innovative technologies that have yet to establish a significant presence within the industry. It is these technologies that hold the key to keeping costs down and productivity up in a market that is more competitive than ever.

An array of innovative technologies will take centre stage at the LNG 18 Conference and Exhibition in April. As always, the LNG Industry team will be in attendance at the show and we invite you to drop by stand 1065 to discuss your latest products and projects with us.