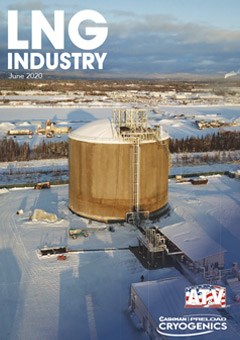 Looking at a global map of marine traffic, the seas and oceans are awash with travel. Whether the vessels are moving goods, transporting people, or carrying crude or LNG, these small icons on the map are evidence that the world still ploughs on, striving to battle through the struggles of Covid-19. Looking at the map without wearing rose-tinted glasses, one may see the crude tankers drifting the ocean for the reason that storage tanks onshore are full and pipelines are at full capacity, or the LNG carriers hovering in no man’s land, incapable of delivering shipments to the markets that the genius of condensing natural gas is now able to reach.

The industry is experiencing huge change, and companies are taking different routes to stay afloat. In Mozambique, ExxonMobil’s Rovuma LNG has been delayed by holding off on the final investment decision, whereas Total’s Mozambique LNG has reportedly secured a deal and is in its first phase of senior debt funding. High-profile projects are not the only aspect of the industry making change, plants that have paused for maintenance are increasingly prolonging the duration of their outage. In Australia, Origin Energy’s LNG venture is one such example where the plant’s maintenance outage has been lengthened, with the understanding that there is no necessity to bring projects online that have high OPEX, as the record low prices being seen in the industry may create difficulty in covering operating costs.

Since Covid-19 was first reported in different countries at different times, and restrictions and safety measures have depended on where in the world you are, the easing of restrictions and reopening of closed industries and markets is equally occurring at varying pace. At the end of April, China received its first delivery of LNG from the US, following 13 months of frozen LNG trade due to the US-China trade war. A handful more tankers are scheduled to carry US LNG to China – which is particularly advantageous for the US who has seen at least 20 LNG cargoes cancelled, mainly by European buyers. The cancellation of cargoes is surprising because rigid contracts are generally in place, although the rule book now seems to have been thrown out the window.

Since the LNG market is currently oversupplied and demand is incredibly low, cargoes are being sold at near-record lows of US$2/million Btu (compared to eight months ago when LNG prices in Asia traded at nearly US$7/million Btu) – hence the increase in cancellations. Exporters are looking with disdain at the low prices, however, new buyers are arriving on the scene, because lower costs mean the availability of money to invest, which will have a knock-on effect on the economy. Whilst the opening up of China’s markets and the revival of trade to the US won’t have miracle results for the weak international gas market, it will have a positive impact nonetheless.

With countries lifting restrictions at various speeds, caution should be taken to ensure there is not an influx of product to the market when, for instance, Australia ramps up production but consumption and demand elsewhere in the world does not require such quantity. In the US, the Energy Information Agency has forecast a decrease in consumption for natural gas in the US this year, with poor economic conditions resulting in less demand from the industrial sector – with a fall expected from 2019’s 21.4 billion ft³/d to 19.9 billion ft³/d in 2020. This will be the first time that consumption has fallen below 20 billion ft³/d since 2016; yet another ‘first’ achieved during the bleak times of mass lockdown.

Whilst the pandemic engulfing the world is disrupting exports, imports, project approvals, and development progress in the LNG industry, there will be a day when demand is once again riding high and some normality will return to the lives of operators, contractors, consumers, and the like. Until then, stay tuned to our social media, website and magazine, to keep updated with the latest industry news.