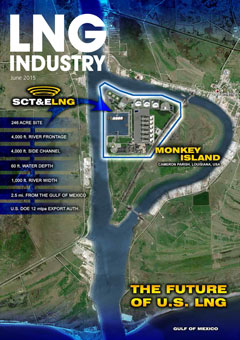 Last month, I received an email from the Director of Economic Development in Cameron Parish, Louisiana, US, in response to the comment that I wrote in the March issue of LNG Industry. Ms Marceaux explained that Cameron Parish is commemorating the 10th anniversary of Hurricane Rita this year, which wiped out 98% of the parish’s housing stock and decreased its population by approximately 30%. Despite these enormous setbacks, Cameron Parish is continuing its recovery: “We are resilient people who value this community in which we live and we have worked hard to build back what once was before Hurricane Rita devastated us a decade ago,” concluded the email.

The LNG industry is playing a very significant role in Cameron Parish’s rebuilding process. Two LNG facilities are currently under construction and four others have been publicly announced.

Ms Marceaux noted that the parish is “looking forward to the construction of these facilities with great enthusiasm,” and it is easy to see why. The projects promise economic development in the region and stand to create thousands of jobs, offering former residents the opportunity to return to the parish.

I have used this comment column on previous occasions to discuss how public opinion can directly impact the success of proposed developments. The importance of obtaining a social licence to operate as well as a government licence has recently been thrust back into the spotlight following new agreements between the government of British Columbia (B.C.) and the Pacific NorthWest LNG (PNW LNG) project, which aim to establish the path to a final investment decision. Although the lucrative agreements would appear to be a step forward for the project, opposition from local communities could yet set it back a couple of steps. Immediately after the agreements were announced, the Treaty 8 First Nations issued a statement pronouncing their “astonishment” at the deal. Although the First Nations were quick to emphasise that they are not opposed to sustainable and responsible natural resource development, they took issue with the fact that they were not fully informed or consulted about the deal. The Lax Kw’alaams First Nation also rejected a huge benefit package recently, due to concerns over the Skeena River salmon habitat. Once again, the First Nation notes that it is open to the LNG project, but not at the expense of development proximate to Flora Bank. Such setbacks are untimely as B.C. tries to capture a portion of the Asian gas market before the window of opportunity closes.

Returning to Louisiana, it is refreshing to read of the community support for the LNG projects in Cameron Parish. This issue of LNG Industry takes a closer look at one of the proposed export projects: SCT&E LNG’s export terminal on Monkey Island. The company, which is currently meeting with potential investors and offtakers, recently announced that it has signed a Memorandum of Understanding with a sizeable natural gas supplier in the US. You can read more about the project, and the company’s work with the local community, in the article starting on p. 28.

On the topic of public consultation, we are in the process of putting together LNG Industry’s editorial schedule for 2016. If there is a particular topic that you would like to see featured in an upcoming issue, or you have a story to tell, please get in touch.