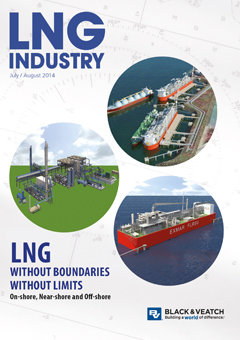 Since the last issue of LNG Industry arrived in your mail back in June, many of you would have spent the intervening months embracing (or escaping, as the case may be) the FIFA World Cup in Brazil. Whether or not your country’s team qualified for the competition, the evidence suggests that this year’s World Cup attracted record viewing figures across the globe. Even our dear colleagues in the United States appear to have finally embraced ‘soccer’, recording the highest viewing figures for the sport in the country’s history.

While many of us would have taken for granted the fact that we could visit a local bar or gather around a friend’s house to watch the games, for a period earlier this year the Brazilian government was extremely concerned that its public may not be so lucky. Following a severe drought in parts of the country, fears loomed that Brazil’s hydroelectric power – which provides approximately 70 - 80% of the country’s electricity – would not be able to meet surging demand throughout the World Cup. The drought lowered water supplies in some hydroelectric dams to near critical levels and resulted in an enormous power cut that affected approximately 6 million consumers and industrial users in some of Brazil’s biggest cities for up to two hours in February.

In its time of need, Brazil turned to LNG to ensure that the lights (and the giant television screens in its fan parks across the country) remained firmly switched on. Petrobras has purchased record amounts of LNG in the spot market so far this year, with the Chairman of Gas Energy, Marco Tavares, estimating that Brazil will import up to 5.7 million t in 2014 compared to 4.2 million t last year, according to a Bloomberg report. The surge in demand led Petrobras and Mitsui Corp. to announce in April that they had signed an MoU to study the possible construction of a fourth LNG terminal in the country, with Rio Grande do Sul mooted as the potential location.

What’s more, Brazil was seemingly willing to pay whatever it cost to avoid the embarrassment of power outages during the World Cup. It is widely reported that Petrobras purchased LNG at approximately US$ 18 - 19/million Btu, which is close to the price that Asian importers are currently paying. And as concerns surrounding the water levels in Brazil’s reservoirs continue to linger, Tavares told Bloomberg that he expects the Brazilian government to keep its gas-fired power plants running for the rest of this year, leading to speculation that the cost of LNG in South America will continue to rise.

Money well spent? The Brazilian government would argue so. Throughout the month-long tournament, LNG helped to ensure that the hundreds of thousands of fans travelling to Brazil could enjoy all of the action without any interruptions – even if the majority of Brazilians would have probably welcomed a power cut during their country’s semi-final capitulation at the hands of Germany! As Brazil turns its attentions to the Rio de Janeiro Olympic and Paralympic Games in 2016, LNG is likely to play an increasingly vital (and expensive) role throughout the region.