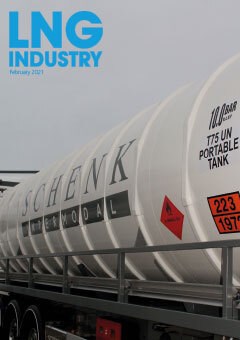 February, the second month of the year, brings associations with the number two – and good things seem to come with this. The animals entered Noah’s Ark in twos, the rhyme “one for sorrow, two for joy”, the number of outcomes in a coin toss, the fact it takes two to tango, there are many examples. Let us focus on the “two for joy” when addressing the LNG industry, and the positive activities occurring at present in this sector.

The regional report this month considers the LNG market in Europe, and sticking with Europe – more specifically, the UK – it was recently announced that several VINCI Construction subsidiaries (Entrepose Contracting, VINCI Construction Grands Projets, and Taylor Woodrow) have been awarded an engineering, procurement, and construction contract by National Grid for the development of a 190 000 m3 LNG tank in the UK. Through the undertaking of this project, the goal is to increase the capacity of the largest LNG terminal in Europe, which, surprisingly, is just 60 km from central London, on the Isle of Grain.

As detailed by Bracewell (p.8), Europe has a remarkable ability to be a market balancer in the face of LNG oversupply, because of its large infrastructure that is mainly targeted at imports. As a result of the expansion of the Isle of Grain terminal – which is already eighth largest in the world by tank capacity – there is scope for further LNG imports to the country, once the project is completed in 2025. One of the primary sources of LNG imports to Europe is the US, but the stability of this relationship is not set in stone.

Attempts by NextDecade – a US company – to make its mark on the European continent have not been particularly fruitful as of late. Just before 2020 came to an end, French company Engie paused its talks with NextDecade to secure a long-term agreement – reportedly worth US$7 billion – for the import of LNG from the US. In addition, mere weeks ago, plans for an FSRU in Ireland ended, after the preliminary deal that was signed in 2017 with NextDecade expired on 31 December 2020, and no discussions have been undertaken to seek a renewal. It seems that both collapsed agreements with NextDecade have centred upon the fact neither importer is too willing to take on LNG produced from shale gas by fraccing.

In this way, it seems that Europe wants to grow its LNG industry from strength to strength utilising more homegrown sources and Eastern locations (i.e. the planned Alexandroupolis LNG terminal off the coast of Greece), than take advantage of the supplies from across the pond to the West.

DNV GL’s latest annual industry outlook, entitled ‘Turmoil and Transformation’, is also rather complimentary of the LNG sector, suggesting that perhaps LNG will be the new oil, as it becomes the fuel driving the world’s most demanding projects. With DNV GL anticipating that there will be an increase in the global trade of LNG, subsequently pushing CAPEX to a peak of US$250 billion for 2024, project announcements such as the one by VINCI Construction should become regular news over the immediate years. Moreover, to conclude this piece in the joyful nature I was aiming for, BloombergNEF recently reinforced the understanding of positive news for global LNG trade, stating that the trade is likely to rise 6% this year from 2020 – a substantial figure when compared with the minimal 0.9% growth experienced between 2019 and 2020. Should the LNG Industry’s nickname for 2021 be, the comeback kid?