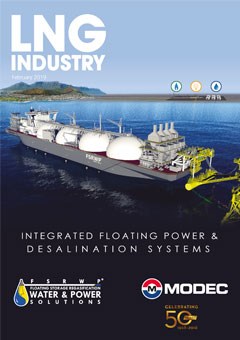 This issue of LNG Industry features a regional report on the Australian LNG market, and so it only seems right that I use this opportunity to discuss my latest muse from Down Under. Reader, let me introduce you to the almost mythical thylacine.

The thylacine, or Tasmanian Tiger, as it is commonly known, was a marsupial unique to Australia that thrived on Australia’s southern island for centuries. The creature was the largest marsupial on the planet in its day; had stripes on its rear; a long straight tail that almost seemed to continue the linearity of its spine; and a jaw that opened to almost 180º.

Sadly, the animal was hunted to extinction in the 19th and 20th Centuries, and the last remaining thylacine was thought to have died in captivity in the 1930s.

Despite its extinction, the thylacine has ironically become a symbol of Tasmania, alongside the island’s other famous resident, the Tasmanian Devil.

Since the 1990s, the Tasmanian Devil has also been found to be currently under attack by something completely different: devil facial tumour disease (DFTD). The disease is having a serious effect on the population of Tasmanian Devils, with the island’s government taking extreme measures to protect it.

Back to thylacines, however, and a number of Australians have claimed that they have in fact seen the creature alive and well in recent times. Whether they have in fact seen the animal, or if it is a case of mistaken identity, or simply of wanting to believe the animal still exists, remains to be seen. Readers can decide for themselves by looking at the various ‘sightings’ found online. It’s fair to treat the possibility of the animal still existing with a hefty helping of salt, but the sheer size of the Tasmanian wilderness may hold more secrets than we know.

Extinct (?) creatures aside, Australia’s LNG market is undoubtedly on the up.

Indeed, in November 2018, the country famously overtook Qatar as the world’s largest exporter of LNG after the successful startup of various projects in the last few years. Although only temporary, Reuters reported that in November 2018, Australia loaded 6.5 million t of LNG for exports, whilst Qatar only exported just over 6.2 million t.1

With Prelude coming online, Australia is certain to take an even greater hold of its position. Nevertheless, Qatar will not go down without a fight, and is planning to increase its LNG capacity by early 2024 to from 77 million tpy to 110 million tpy.1

In addition to this, the US is also taking great efforts to grow its LNG industry, and is sure to make a claim to the LNG throne in the near future.

In the meantime, however, Australia is clearly top dog; or is it thylacine?

We hope you enjoy this latest issue of LNG Industry. Please feel free to pick up a free copy at the Australasian Oil & Gas Conference & Exhibition, as well as at the 3rd Annual LNG USA Summit.