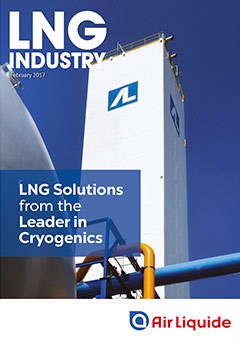 Every year the Mediterranean plays host to holidaymakers from around the world. With reliably hot summers, idyllic beaches, and some fantastic local cuisine, it is no surprise that the region has become one of the most desirable destinations for those seeking a relaxing break.

Visions of flip-flops and siestas in the sun seem a distant fantasy at the moment however as cold weather dominates the forecasts in much of Europe. Greece, Italy and Turkey were among the countries grappling with heavy snow and freezing temperatures in January. Large swaths of Greece have been hit by sub-zero temperatures and heavy snowfall. The normally mild Greece has witnessed temperatures of -15°C in the north.

The LNG picture in the Mediterranean right now is decidedly frosty. Cold weather and problems with Algerian gas supply have pushed up Europe’s gas prices. Supply from Algeria has been reduced due to problems at Sonatrach’s Skikda LNG export terminal, just as demand reached its peak.

French gas grid operator GRTgaz announced in January that a force majeure in Algeria and tensions in the global gas market were reducing deliveries of LNG to southern France. The force majeure is in place after Algeria’s Skikda LNG facility, which is used for deliveries to French and European markets, went into a scheduled maintenance operation. Deliveries to the Fos-sur-Mer terminal were at about 40 GWh per day, considerably lower than the 70 GWh per day required to meet increased winter demand for power and heating.1

Such problems have resulted in US exporters shifting their focus to Southern Europe from Asia. The prices in Europe are currently at their highest premiums to US gas prices for three years. Several cargoes from the US have already capitalised on this and made their way to Europe.2

In January 2017, one vessel delivered US gas to Spain and another arrived on Turkish shores. Two more vessels transporting US gas were sailing in the Mediterranean and another was moving across the Atlantic. Spain, Greece and Turkey would be other possible destinations for the US LNG cargoes. The flow would be expected to slow in March, as winter comes to an end in Europe and the LNG cargoes are gradually replaced by tourists.

This month’s regional report focuses on the changing LNG scene in the Mediterranean. Richard Bass of Navigant Consulting Inc. considers how the East Mediterranean gas market has changed over the past ten years, and how it will continue to do so in the future. Whilst much of the region continues to import LNG on a large scale, Bass investigates how many smaller countries are intent on exploring their exportation potential, viewing LNG exports as an ideal route to market. How do you see the picture developing in the Mediterranean? Do you believe in the long-term exportation potential of the smaller Mediterranean players? Please let us know your thoughts.

We hope you enjoy this issue of LNG Industry and if you picked up a copy at either the US LNG Summit or the Central & Eastern European Gas Conference, don’t forget to visit www.lngindustry.com to subscribe and receive more world-class technological updates for the international LNG industry.