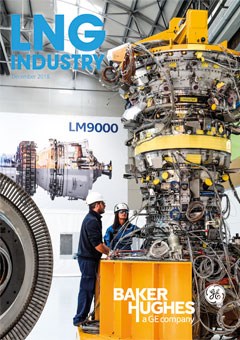 And so the festive period has arrived. With an uncharacteristically hot summer this year in the UK, it seems that December has landed upon us out of nowhere. Gone are the sunglasses, shorts and trips to the beach, and in are wooly jumpers, hot chocolates and audio-torture served by the likes of Mariah Carey, Slade and Bob Geldof.

All I want for Christmas is not to have my ears beseiged by jingle bells rising in volume until I collapse in a fit of insanity in an equally garish shopping centre.

As you can clearly see, I can’t wait for Chrismas. In a desperate effort to ignore the noise, let’s take a look back at 2018.

Indeed, this past year has been a big 12 months for the LNG industry, with several milestones reached, cargoes shipped, and contracts signed. In March, for instance, Dominion Energy Cove Point (DECP) announced that it had successfully exported its first LNG cargo from its Cove Point LNG facility in Maryland, US.1

And in October, LNG Canada was given the green light to proceed – perhaps the cherry on the proverbial cake.

In addition to this, AIDA Cruises announced that the AIDAnova has become the world’s first cruise ship to be fuelled by LNG. This too is hugely significant, as it marks the first step into a potentially lucrative market for the fuel.

It is clear then, that the industry is starting to pick up, with serious investment now being made. Indeed, as I discussed in my comment for the October issue of LNG Industry, the general mood at Gastech 2018 was positive, with companies now looking to invest capital into new projects. As one Reuters article discussed, it is expected that the positive FID for LNG Canada will kick-start a spate of positive FIDs next year.2 Exciting times ahead then.

Nevertheless, gaining a truly accurate picture of the market next year is never that straightforward, and markets rarely grow smoothly with no unforeseen obstacles and challenges in the way.

Indeed, during one summit session at the CWC 19th Annual World LNG Summit & Awards Evening in Lisbon, Portugal, the audience were asked what they thought the oil price would be next year. Whilst over 50% selected the US$60/bbl – US$70/bbl range, there was clearly some disagreement or, at the very least, uncertainty.

Whilst ‘uncertainty’ has been and remains an omnipresent buzzword, it is clear that the industry is now back on track, with several projects in development or scheduled to come online shortly.

In the meantime, let’s enjoy the festive period and keep our fingers crossed for 2019. Happy Holidays!