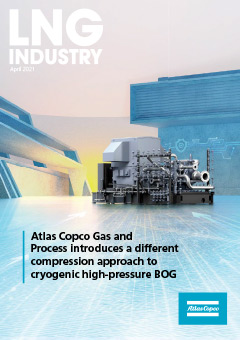 There is something in the psyche of humans that seems to make us desire the tallest, the fasted, the biggest, the most multi-talented things, irrespective of their shortfalls. Take the speediest passenger airline – Concorde – a short-lived thrill for a mode of transport twice the speed of sound. Or consider the man-made islands of Dubai, an act of human superiority over nature, yet most of the islands now lie empty or sinking.

Thinking of extreme size, and pictures of an enormous creation saturated the news recently when a containership 400 m long – taller than the Empire State Building in New York, US, if placed vertically – became wedged in the Suez Canal. The event drew much social media attention for its comedic, calamitous nature, but the disruption that unfolded in one of the world’s most crucial waterways for global trade, particularly the LNG industry, needs to be highlighted.

The Suez Canal in Egypt provides the shortest sea link between Asia and Europe, connecting the Mediterranean Sea to the Red Sea. It is reported that approximately 12% of global trade passes through this route, equating to 50 vessels per day. The goods carried by these vessels range from Ikea furniture and coconut milk to livestock and oil, to name a few. When the Ever Given – the vessel transporting nearly 20 000 containers to the Port of Felixstowe, UK – became stuck in the Suez Canal for seven days, the flow of goods it disrupted amounted to US$9.6 billion/d.

At its peak, there was in the region of 370 vessels unable to transit either end of the Suez Canal whilst the Ever Given was jammed. According to Kpler LNG, there were 18 LNG vessels impacted by the extreme congestion, many of them holding expired ETAs for transit. Rasheeda, a Qatargas LNG carrier, was stuck waiting for the full seven-day disruption – impacting the crew on board, the end consumers of the LNG, and adding to the delays at Ras Laffan, since eight LNG vessels caught up in the blockage belong to Qatargas.

The Suez Canal is a vital waterway because it provides the most direct route between continents. An alternative route passes via the Cape of Good Hope at the southern tip of Africa, which adds multiple days to a vessel’s journey, however, at least eight LNG vessels chose to reroute this way rather than wait idle for the Ever Given to be freed. To put into perspective the lengthy route detour, for a vessel travelling from Singapore to Rotterdam utilising the Suez Canal, the distance is 8440 nautical miles, whereas the distance rises to 11 720 nautical miles between the two locations when travelling via the Cape of Good Hope.

Whilst the Ever Given has now been released from its unwanted jam, the problems continue to unfold, with the vessel impounded and caught in a legal dispute between Egyptian authorities and the vessel’s owners regarding the financial implications of the incident. The compensation being sought by the canal authorities is in the region of US$900 million to US$1 billion.

Returning to our discussion on the biggest, fastest, and largest, it appears that disruptions and accidents are likely to occur more frequently than with something of more ‘standard’ build. However, there are lessons to be learnt to make sure events cause the least damage possible. With a highly-publicised incident such as the Ever Given, the shipping industry should now consider how fundamental enormous vessels are to the market, or at least develop and introduce more precautions to increase the safety of such megaships.