A stranded couple have been rescued by the captain and crew of the Stena Clear Sky LNG carrier. The couple, Pablo Tatulli and Marion Lacan, as well as their cat, Loustic, had lost power for approximately four days, and were unable to start their generator north of Brazil. They were rescued on 16 August and safely dropped off in the Port of Spain, Trinidad and Tobago, the following day.

Captain Burton said: “I'd just like to say that I was lucky to be passing, in the right place and time, and I only did what anyone in my position would have done.”

The couple said: “When we first saw the ship lights at night and heard the captain’s voice on the radio, we felt relieved. Then, this giant ship came towards us. We were really impressed by its size next to our little sailing boat. All we could see was the giant dragon face painted on the side becoming bigger and bigger. That was really scary.

“Thanks to the captain’s perfect manoeuvre, we were able to come on board ‘sain et sauf’ The crew was welcoming and [worried] about our well-being. We were exhausted so they brought us to a cabin, covered us with food and drinks. We finally slept an entire night, the first time in a long time!”

Read the article online at: https://www.lngindustry.com/lng-shipping/24082016/stena-clear-sky-lng-carrier-rescues-stranded-couple-2953/ 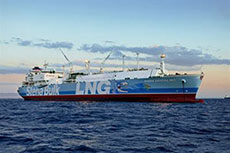 Stena Bulk has signed an agreement to charter out its Stena Blue Sky LNG carrier to the North West Shelf Project in Australia.

New sulphur emission rules coming into force in 2015 will have a significant economic impact on Stena Line.

Stena Bulk has bought three LNG tankers from the Taiwan-based shipping company TMT for a total of US$ 700 million.