The announcement followed the inauguration of the canal’s state-of-the-art scale model manoeuvring training facility, which will allow pilots and tugboat captains to receive hands-on experience of operating in the expanded canal. The training facility, which covers 35.3 acres, features two lakes connected by a channel, docking bays, and replicas of the new and existing gates, locks and chambers (at a 1:25 scale).

The facility also features a number of scale model tugboats, as well as vessels constructed at Port Revel, France, including bulk barriers, which have been modelled on the Nord Delphinus, and a containership modelled on the Maersk Edinburgh. Furthermore, an LNG vessel will be delivered by September 2016.

Wave and wind generators are also included in the training facility, in order to prepare canal pilots and tugboat captains for the conditions of the expanded canal.

Jorge L. Quijano, the CEO of the Panama Canal Authority, said: “The scale model training facility will allow us to continue providing world-class service to the global maritime industry, while guaranteeing safe and efficient transits through the soon-to-be inaugurated expanded canal.

"The dream of expansion will become a reality when we inaugurate the biggest infrastructure project in the history of the canal and the country of Panama." 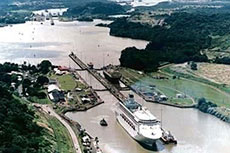