Mitsui O.S.K. Lines (MOL) has announced that its LNG MALEO carrier has rescued three survivors approximately 280 km east off of Mindanao, the Philippines, in the Pacific Ocean.

The survivors were rescued on 4 August 2016 after the crew of the LNG carrier – sailing from the Port of Luwuk, Indonesia, to the Port of Oita, Japan – spotted a drifting fishing boat and changed course to rescue them.

The following day, all survivors were turned over to a rescue boat arranged by the Philippine Coast Guard.

In the same month, it was announced that the Stena Clear Sky LNG carrier crew had similarly saved a stranded couple (and their cat) north of Brazil.

Read the article online at: https://www.lngindustry.com/lng-shipping/20092016/lng-carrier-crew-rescues-stranded-fishermen-in-pacific-ocean-3073/ 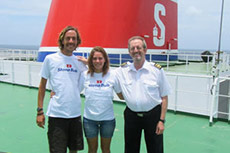 A stranded couple and their cat have been rescued by the captain and crew of the Stena Clear Sky LNG carrier.