Wärtsilä has announced that it has formed a coalition alongside a number of other marine industry players to speed up the widespread use of LNG as marine fuel. The coalition, which is known as SEA/LNG, will aim to break down the obstacles to the development of the fuel on a global scale.

The coalition will largely focus on the following:

The Vice President, Flow & Gas Solutions, Wärtsilä Marine Solutions, Timo Koponen, said: “This is a strong coalition combining the expertise of major fleet owners, classification societies, port facilities, and energy experts. Wärtsilä contributes its vast experience and know-how in gas driven propulsion systems and the entire gas value chain. By working together, we plan to overcome the challenges and speed the general acceptance of LNG. Having been a pioneer in the use of LNG as a marine fuel, and a developer of major technologies facilitating the adoption of LNG fuel, it is natural that Wärtsilä supports wholeheartedly the aims of the SEA/LNG coalition.”

Read the article online at: https://www.lngindustry.com/lng-shipping/13072016/wartsila-forms-coalition-to-promote-the-use-of-lng-as-a-marine-fuel-2741/

Wärtsilä believes that the acquisition will enable the company to grow and strengthen its digital offering and in-house capabilities.

Wärtsilä has signed an agreement to ensure the reliable operation of GasLog’s seven LNG carriers.

Wärtsilä has completed the acquisition of L-3 Marine Systems International. 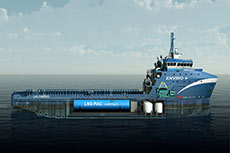