General Dynamics NASSCO has released a statement claiming that it has launched another ECO Class tanker to join the Jones Act fleet – the Garden State. The Jones Act states that all vessels carrying cargoes between US ports must be built in the US.

The Garden State is the third of five tankers for American Petroleum Tankers. The vessels are 50 000 DWT, have a barrel cargo capacity of 330 000, are 610 ft long, and are LNG conversion-ready.

“NASSCO is proud to be building yet another quality product tanker for long-time partners American Petroleum Tankers and Kinder Morgan.”

Along with the other ECO Class vessels, the Garden State is among the first ships to receive a PMA+ Notation, which facilitates safe access to the vessel structure and spaces.

The Vice President of Kinder Morgan Terminals and the President of American Petroleum Tankers, Rob Kurz, said: “We are excited to see our third ECO Class tanker, the Garden State, launched and christened.

“This marks another milestone in the construction process of our five ship programme with NASSCO. We thank everyone at NASSCO for their continued support and look forward to adding this impressive vessel to the APT – Kinder Morgan fleet this coming August.”

A subsidiary of Daewoo Shipbuilding & Marine Engineering (DSME), DSEC, designed the vessels. The design includes fuel efficiency concepts, which are provided through various features, including: a G-series MAN ME slow-speed main engine and an optimised hull form. In addition to this, the vessels will feature dual-fuel-capable auxiliary engines and the ability to accommodate the future installation of an LNG fuel-gas system.

Greg Cox, from the San Diego Board of Supervisors, was the keynote speaker at the launching ceremony. He said: “When people ask about San Diego’s working waterfront, all we have to do is point them to NASSCO.

“This ship launch is another example of the growing might and reach of San Diego’s Blue Economy of maritime related industries.”

Yvette Romasko, the ship sponsor, christened the vessel by ceremoniously breaking a bottle of champagne across its hull.

Read the article online at: https://www.lngindustry.com/lng-shipping/10052016/general-dynamics-nassco-launches-third-lng-conversion-ready-tanker-2417/ 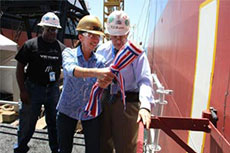 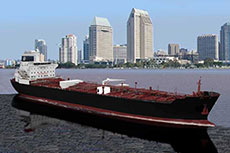