Local governments in Northwest British Columbia have formed an alliance to negotiate revenue share from the province’s LNG industry.

Bidgood called for an immediate start to revenue-sharing discussions and negotiations promised by Premier Christy Clark during the 2013 provincial election and re-affirmed in June 2014.

Commenting on the alliance, Bidgood said: "The newly formed Northwest BC Resource Benefits Alliance is ready, willing and able to engage in revenue-sharing discussions and negotiations promised by Premier Christy Clark.

"There is not a moment to lose. We need to start revenue-sharing discussions immediately; Northwest BC is already booming. I understand that the province is finalising its fiscal framework for the LNG industry, and major companies will be making final investment decisions this fall or in early 2015."

There are precedents for significant revenue sharing including the Columbia Basin Trust.

Bidgood added: "The RBA seeks early access to an equitable share of revenues from the massive economic expansion now underway in Northwest BC. We have all experienced the boom and bust economy. The Northwest is about more than fly-in fly-out camps. This time, Northwest BC communities must be provided access to significant revenue sharing so we can make the necessary investments to build long-term sustainable communities for the future."

The province is projecting revenues of CAN$ 100 billion from LNG alone, without allowing for other new major resource development in sectors such as mining. A revenue share of only 3% would generate CAN$ 3 billion to invest in Northwest BC communities of the future.

"Northwest BC communities do not have the resources to go it alone. The good news is that the scale of projected provincial revenues means that the needs and priorities of the province, as well as Northwest BC communities, can be met without adversely impacting the current and future property tax bases of the region, reducing the level of funding for other provincial programs, or risking the competitiveness of current and future companies operating in Northwest BC," Bidgood concluded.

Read the article online at: https://www.lngindustry.com/liquid-natural-gas/30072014/local-governments-form-alliance-to-share-lng-revenue-1097/ 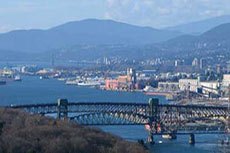 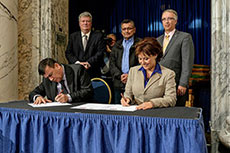 British Columbia has increased the competitiveness of its royalty program to support the long-term prospects of an LNG industry.

The Treaty 8 Tribal Association will be hosting the next First Nations LNG Summit in Fort St. John, BC.