HAM Group opens a new LNG service station in Navalmanzano, Segovia, Spain, located on SG-332, next to the entrance and exit of the A-601, known as the Pinares highway, with significant traffic, it is more than 100 km, which goes from the VA-30 (external round of Valladolid) to the SG-20 (Segovia bypass road). 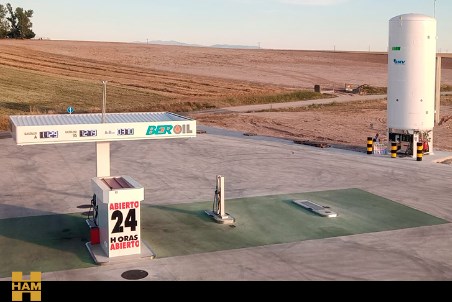 The new service station, which has been named BENITO, has been developed by HAM Criogénica, together with HAM’s R&D team, and is characterised mainly by needing only one day to be installed and put into operation, reducing the construction time of the gas station considerably. The gas station has an 80 m3 tank, in which the dispenser and payment terminal are integrated. The new supply unit, created by HAM’s team of engineers, marks a new milestone, together with the company’s mobile service stations, Yellow Project and other innovations, which position HAM as a leader in the design and construction of CNG-LNG service stations.

The BENITO service station installed in Navalmanzano, Segovia, allows heavy vehicles and all types of trucks to refuel with LNG, since it keeps the liquid subcooled and adapts immediately to the optimal temperature of the different brands: Iveco, Scania, or Volvo, allowing fast and safe refuelling with an innovative nozzle, designed by HAM, with a ‘nofrost’ system and a double anchoring and closing system, in order to avoid leaks, liquid losses, and facilitate its disconnection without emitting gas into the air.

The opening hours of HAM Navalmanzano GNL are 24 hours, throughout the year, being able to freely access and make payments with any debit or credit card or with the HAM card for professionals.

With this new opening, the company continues to expand its gas station network, made up of more than 80 service stations, between fixed and mobile, which are available on the main transport routes in Spain and Europe. The company continues to bet on natural gas for vehicles, as a sustainable, real alternative, reducing CO2, nitrogen, and fine particle emissions. In addition, the use of NGV allows its clients to save 30 - 50% compared to other fuels.

Read the article online at: https://www.lngindustry.com/liquid-natural-gas/23072021/ham-opens-new-lng-service-station-in-spain/