HAM Group delivers its new LNG service station and satellite plant to Etelä-Savon Energia Oy, which has been designed, built, and commissioned by HAM Criogéni-ca. 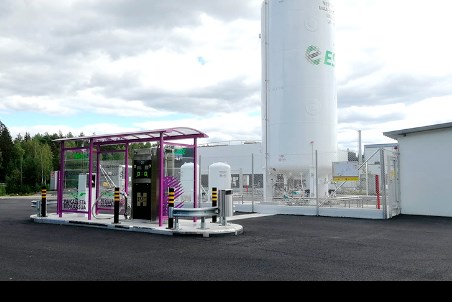 Its new LNG service station is located in Mikkeli, Finland, the most important city in the South Savonia region. It has an 80 m3 vertical tank and a LNG dispenser that allows the refuelling of trucks and heavy vehicles. It should be noted that the plant also acts as a satellite plant offering Natural Gas to an adjacent factory through forced regasification with a water/glycol and LNG exchanger, and with a double regulation line. The design made by HAM Criogénica allows an easy expansion of the gas station, with a second LNG dispenser.

The project has been possible thanks to ESE's commitment to LNG. The Finnish company, which has been providing light, heat, and well-being in the Mikkeli region for more than a century, will offer its customers the possibility of refuelling LNG, a cleaner and more environmentally friendly fuel, thanks to the reduction of CO2 emissions, nitrogen oxides and fine particles. In addition, LNG allows significant savings of 30 - 50% compared to other less eco-friendly fuels.

HAM Criogénica, the company in charge of developing the project for the new Etelä-Savon Energia Oy service station, is one of the leaders in the engineering sector, with extensive experience in the field of LNG and with more than 300 projects carried out throughout the world, designing and building facilities for all types of industries and the naval sector.

HAM Group work and innovate in direct contact with its clients, to be able to offer the best services and products, related to natural gas, that are adapted to real energy needs. The company has designed and built one out of every four LNG service stations that currently exist in Europe, many of them being HAM Group’s property and forming part of its network of stations. The company’s fixed and mobile gas stations are in Belgium, the Czech Republic, Finland, France, Germany, Holland, Italy, Poland, Slovakia, Spain, Switzerland, and the UK.

Read the article online at: https://www.lngindustry.com/liquid-natural-gas/22072021/ham-builds-lng-service-station-for-etel-savon-energia-oy/