Based in Texas, US, Pilot LNG, LLC has laid the foundation for a partnership with GAC Bunker Fuels (GAC) for the supply of LNG as a marine fuel from its proposed Galveston LNG Bunker Port terminal project, which will be the first dedicated LNG bunker terminal in the region. 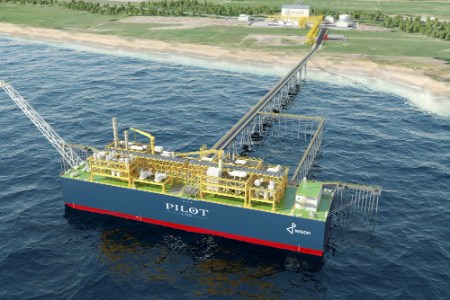 The two companies have executed a Heads of Agreement (HOA), which outlines the terms of a partnership. It prepares the ground for Pilot to provide LNG marine fuel to GAC on a Delivered Ex-Ship (DES) basis for its customers in the Galveston Bay Port complex, including the ports of Houston, Galveston and Texas City, as well as Galveston Offshore Lightering Area, on a long-term basis.

“The Galveston LNG Bunker Port will provide the LNG to supply GAC’s growing market for cleaner marine fuel, particularly as its customers seek economic ways to comply with tightening emissions regulations, including IMO 2020,” says Pilot Chief Executive, Jonathan Cook. “The opportunity to work with such a strong global player like GAC is a very exciting step forward for Pilot and the Galveston project.”

GAC Bunker Fuels’ Global Director Nicholas Browne adds: “We have a proven track record of more than three decades supplying quality marine fuels to the shipping sector, and we continually adapt to meet our customers’ evolving needs. This agreement with Pilot will allow us to grow our portfolio of alternative fuels, with LNG as the cleanest and most cost-effective way for shippers to meet compliance.”

GAC Bunker Fuels is the world’s only bunkering company with an integrated ISO 9001, 14001, and 45001 certification for bunker procurement that also covers LNG as a marine fuel. In September, GAC acted as the bunker broker for the Swedish dual-fuelled vessel FURE VEN when it became the first non-US flagged vessel to bunker LNG in the US, taking on supplies at the Port of Jacksonville (JAXPORT).

As international regulators tighten emissions standards, the maritime industry is increasingly turning towards LNG as the marine fuel of choice due to its significantly lower emissions profile and cost competitiveness; however, additional LNG bunkering infrastructure is needed before widespread adoption can occur.

The HOA with GAC follows Pilot’s announcement in July that it had filed regulatory applications with the US Army Corps of Engineers (USACE) and other relevant regulatory agencies, paving the way for a Final Investment Decision (FID) in 2021 and allow operations to begin in late 2024.

Read the article online at: https://www.lngindustry.com/liquid-natural-gas/21102020/pilot-lng-to-supply-lng-as-a-marine-fuel-to-gac/