Navigator Gas has announced that the Navigator Aurora has been delivered to the Jiangnan Shipyard in Shanghai, China. The vessel is 180 m long, and has a carrying capacity of 37 300 m3, capable of carrying 20 000 t of ethane/ethylene.

The vessel is the first of four Navigator Gas ethane/ethylene midsize vessels, and has been chartered for a minimum of 10 years to the European chemical group, Borealis. It will transport ethane from the East coast of the US to Europe, with commercial operations scheduled to commence in 4Q16.

The vessel’s propulsion and electrical systems are designed to use LNG or methane as fuel, in addition heavy oil and marine gas oil (MGO). Furthermore, the company adds that it is advanced in the process of enabling the ship to burn ethane as a third fuel option.

Read the article online at: https://www.lngindustry.com/liquid-natural-gas/11082016/navigator-aurora-delivered-to-jiangnan-shipyard-2892/ 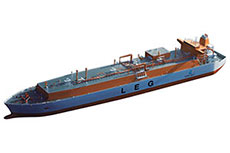