HAM Group has continued to expand its network of LNG service stations in Europe, thanks to its agreement with the Dutch company PitPoint, which will allow HAM Card users to refuel at two new stations in Belgium and the Netherlands. 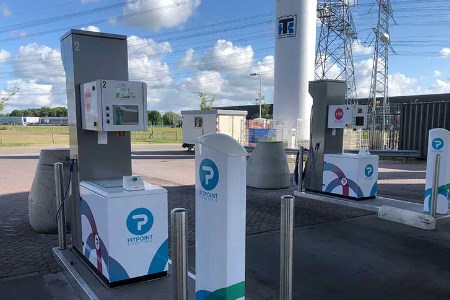 The first of these two new stations is Rekkem, located at Lar, Rijksweg 746, 8930, Belgium, close to the French border, close to the E17/A14 motorway, between Kortrijk and Lille. It is a favourable location for transport throughout the Benelux.

Regarding the Netherlands station, it is the Zwolle station, located at Kleefstraat 7, 8028 PR, next to the N758 and 10 minutes from the A28 motorway that crosses the Dutch provinces of Utrecht, Gelderland, Overijssel, Drenthe, and Groningen.

PitPoint LNG stations are unmanned and accessible 24/7. Step-by-step refuelling instructions are available in 11 different languages and can be selected via the top button of the pump display. In addition, the stations in Zwolle (the Netherlands) and Rekkem (Belgium) have extra cold LNG (for a better range) available, especially for Volvo trucks.

Currently, HAM Group customers have access to a network of service stations made up of 76 LNG and/or CNG gas stations; of which 30 are in Spain, 16 in Italy, 9 in Belgium, 14 in the Netherlands, and 7 in France, all located in strategic points for road transport.

Read the article online at: https://www.lngindustry.com/liquid-natural-gas/03122020/ham-group-expands-its-network-of-lng-service-stations/