According to Reuters, ExxonMobil’s Papua New Guinea LNG (PNG LNG) facility has launched a tender to sell a single cargo in late September 2016.

Reuters claims that one trade source said that bids for the tender are due on 31 August 2016.

Reuters also claims that the project recently sold another cargo to Tokyo Electric Power Co. This was part of a separate tender, and was sold at a price pegged at US$5.40/million Btu.

Read the article online at: https://www.lngindustry.com/liquefaction/31082016/png-lng-launches-tender-to-sell-a-single-cargo-2974/ 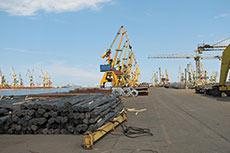 The second custom-built LNG carrier for the Papua New Guinea LNG project has been officially named at a ceremony at Hudong-Zhonghua Shipyard in Shanghai, China.

PNG LNG is reportedly operating at 6% above design capacity, and will continue to do so for the rest of 2015 and into 2016.

Oil Search has released its first half 2014 results, highlighting the progress of the Papa New Guinea LNG project.