The company has welcomed the recent announcement that two of its largest customers in Papua New Guinea have proposed to combine. The two customers have stated that this combination would lead to strong support for the construction of a new LNG project.

The proposal will lead to rigs 115 and 116 being under contract to the combined entity, in addition to rigs 103 and 104, which are presently operated by High Arctic on one customer’s behalf. High Arctic argues that there will be opportunities regarding both synergies and efficiencies for its rigs under a common operatorship.

At present, rig 103 is carrying out a drilling programme in the Western Province, which is scheduled for completion in 4Q16. Rig 104, meanwhile, is currently on standby, and is waiting to start work on its next well, Muruk-1, which is also expected to begin in 4Q16. Rig 115 has been demobilised from its last well, and will commence mobilisation to drill Antelope 7 in July 2016. Rig 116, meanwhile, is still on standby in Port Moresby, Papua New Guinea/.

In the statement, High Arctic also confirmed that it has reached agreements with its customer for an interim extension to its drilling and related services contracts for Rig 104 until 31 October 2016. As part of the contract assignment to another customer to finalise their drilling programme in the Western Province, the contract for rig 103 is also given an extension. High Arctic claims that it is continuing to progress its discussions with its customer regarding a long-term extension of its drilling and support services contracts for rigs 103 and 104.

Tim Braun, CEO, said: "These are exciting developments in Papua New Guinea and we congratulate our customers on their progress towards building a new LNG project in PNG which provides some of the lowest supply cost LNG in the world. We are proud to have been a part of the LNG development in PNG over the last nine years and are committed to continuing to provide strong safety and operational performance, which are so important in a remote location such as PNG."

Read the article online at: https://www.lngindustry.com/liquefaction/30062016/high-arctic-releases-update-on-papua-new-guinea-operations-2682/ 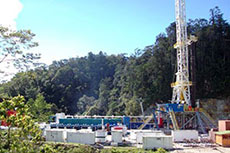 High Arctic’s Board of Directors has approved a capital budget of CAN$36 million for 2015.