The British Columbia (B.C.) government has announced that, so far, 62 pipeline benefits agreements have been signed with 29 of the 32 eligible First Nations that are situated along four proposed gas pipeline projects. These projects include the Pacific Trail Pipeline, Coastal GasLink Pipeline Project, Prince Rupert Gas Transmission Project, and the Westcoast Connector Gas Transmission Project.

All 16 First Nations that are located along the Pacific Trail Pipeline have joined to create the First Nations Limited Partnership (FNLP). The proposed project comprises a 480 km pipeline to deliver gas from Summit Lake to the Kitimat LNG facility at Bish Cove. The B.C. government has agreed to provide CAN$32 million in direct benefits during the project’s construction phase, followed by an additional CAN$10 million/yr during the operation of the project. Members of the FNLP include the following:

So far, 16 out of 19 First Nations located along the pipeline route have signed benefits agreements with the B.C. government. The proposed project involves a 900 km natural gas pipeline to supply gas from the Hudson’s Hope area to the proposed Pacific NorthWest LNG (PNW LNG) facility near Prince Rupert. So far, 11 of these First Nations groups have announced their agreements. These include:

The Westcoast Connector Gas Transmission Project is a proposed 850 km natural gas pipeline to supply gas from northeast B.C. to BG Canada’s proposed LNG export facility on Ridley Island. 14 out of the 19 First Nations located along the pipeline route have reached agreements with the B.C. government. Of these, three First Nations have brought their agreements into effects. These include:


Read the article online at: https://www.lngindustry.com/liquefaction/28042016/62-pipeline-benefits-agreements-signed-so-far-2370/

The McLeod Lake Indian Band has signed two agreements with the provincial government that will provide benefits through the development of British Columbia’s LNG industry. 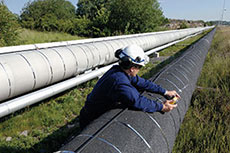