Reuters claims that the Arctic LNG-2 project is scheduled to be commissioned by 2025. It too will have a production capacity of up to 16.5 million tpy of LNG.

The Chief Executive of Novatek, Leonid Mikhelson, reportedly said: “When implementing Arctic LNG-2, we will aim not to pre-sell all 100% of production but to leave a share for spot trading.” Mikhelson added that shareholders in the Yamal LNG project, as well as other investors, had already shown signs of interest in the Arctic LNG-2 project.

Read the article online at: https://www.lngindustry.com/liquefaction/20062016/novatek-plans-to-sell-some-arctic-lng-2-gas-on-the-spot-market-2625/

OAO NOVATEK has announced the signing of binding definitive agreements as part of a transaction for selling an equity stake in the Yamal LNG project to China’s Silk Road Fund. 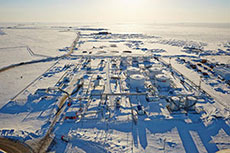 Novatek has signed a long-term contract with Shell for the supply of LNG from the Yamal project.

Heads of agreement concludes that Yamal LNG is to supply CNPC with LNG.