According to Reuters, ExxonMobil is looking for a quick solution to a royalty disagreement between the Government of Papua New Guinea and PNG LNG project landowners. This follows protests at the project site.

Reuters claims that an agreement with the government sets aside 2% royalty for landowners. This is then to be held by the government until the clans’ claims of land ownership have been ratified. Reportedly, this process has not been finalised.

ExxonMobil reportedly said that its facilities are still currently operating, adding: “We respect the right of individuals to peacefully protest, but we also encourage continued dialogue between landowners and the government to resolve their outstanding issues promptly."

Read the article online at: https://www.lngindustry.com/liquefaction/09082016/exxonmobil-seeks-quick-solution-to-png-lng-landowner-dispute-2879/

PNG LNG is reportedly operating at 6% above design capacity, and will continue to do so for the rest of 2015 and into 2016.

The PNG LNG project remains on schedule, following the recent completion of its 292 km onshore section of pipeline. 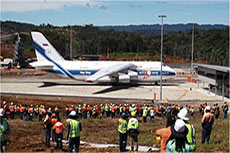