According to Reuters, two sources have said that Eni has finalised talks with ExxonMobil regarding the sale of a stake in the planned Mozambique LNG development. One source claimed that the deal has been agreed, but that it will not be announced for a number of months. In response, ExxonMobil said that it does not comment on market rumours or speculation, whilst Eni declined to comment altogether.

Reuters claims that the offshore gas reserves that have been found in Area 4 are so significant as to require a land-based LNG export facility. The relatively short distance to both Middle Eastern and Asian growth markets means that the project has the potential to generate a significant amount of money.

Eni sold 20% of its Area 4 licence to CNPC for US$4.2 billion in 2013. However, Reuters claims that discussions with Exxon have been slow-moving because of differences over valuations, due to the fall in both oil and gas prices.

Despite the fact that Eni has reportedly been hesitant to sell a significant amount of its 50% stake in the Area 4 permit, Reuters claims that the Chief Executive of the company, Claudio Descalzi, has recently increased the possibility of selling a 25% stake. Previously, Reuters reports that just 10 – 15% was up for sale.

The deal that has reportedly been reached by the two companies could see ExxonMobil hold an operating stake in the onshore LNG facility, whilst Eni would maintain its control of the Area 4 gas fields that would feed said facility. According to Reuters, the focus of the development will be large onshore plants, although Eni will still export LNG from at least one floating offshore platform in Coral field development (which is located in Area 4). One source reportedly added that the Coral field development will lie outside of the ExxonMobil deal, and that Eni has designated Phase 1 development LNG of Coral to BP.

Read the article online at: https://www.lngindustry.com/liquefaction/08082016/eni-reportedly-reaches-agreement-with-exxon-for-stake-in-mozambique-lng-2872/

The CEO of Italian energy company, Eni – Claudio Descalzi – has stated that the company is ‘not far’ from selling a stake in its Mozambique gas project.

Eni has announced that the Government of Mozambique’s Council of Ministers has approved its plan of development for the coral discovery, which will involve the installation of a floating LNG unit.

Eni has announced that it has made a world class supergiant gas discovery at its Zohr Prospect, Egypt. 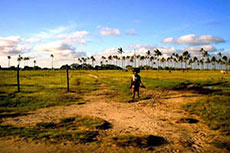 Eni has announced that it has made a giant natural gas discovery offshore Mozambique.