Williams Partners L.P. has released a statement claiming that Transcontinental Gas Pipe Line Co. LLC (Transco) has filed an application with the US Federal Energy Regulatory Commission (FERC) seeking authorisation to build a 475 000 dekatherm per day (Dth/d) expansion in Texas and Louisiana to connect US natural gas supplies with global LNG markets.

The Gulf Connector Project will be built in two phases, and will deliver 75 000 Dth/d to Freeport LNG Development L.P.’s liquefaction project by 2H18. In 2019, it will also deliver 400 000 Dth/d to Cheniere Energy’s Corpus Christi liquefaction terminal. Pending the relevant regulatory approvals, construction of the first phase will commence in 3Q17, and will go into service during 2H18.

Both liquefaction facilities are currently being built. The Freeport LNG export terminal will have a total of three liquefaction trains, with an aggregate export capacity expected to be approximately 15.3 million tpy. Operations are planned to start in phases between September 2018 and August 2019. Meanwhile, Cheniere Energy’s Corpus Christi liquefaction terminal is proposed to have up to five liquefaction trains with an aggregate nominal production capacity expected to be up to 22.5 million tpy of LNG. Two of these trains are currently under construction. Williams claims that the trains one and two of the terminal are expected to reach substantial completion in 2019.

Rory Miller, the Senior Vice President of Williams Partners’ Atlantic-Gulf operating area, said: “This project underscores how the abundance of natural gas in the US is changing the global energy landscape.

“The U.S. is projected to become the world’s third-largest LNG supplier in five years. Projects like Gulf Connector, which leverage existing gas pipeline infrastructure, make it possible to connect abundant domestic supply with emerging international markets, giving a boost to the US economy while helping meet the world’s increasing energy needs.”

Read the article online at: https://www.lngindustry.com/liquefaction/02092016/williams-partners-advances-gulf-connector-project-2993/ 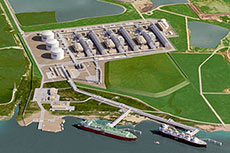