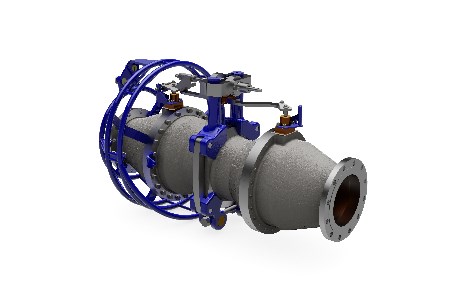 With the increased use of FSRUs as moored storage terminals, Alpha has developed a 10 in. version of its field-tested, mechanical emergency release coupling system, which is capable of managing the ship-to-ship transfer of LNG of 2250 m3 per hour per line.

This will enable, when operating across multiple lines, the ERC systems to support the optimum transfer flow for an FSRU of 10 – 12 000 m3 per hour.

The technology incorporates an engineered-solution to manage low pressure drops, which ensures the transfer can achieve high flow rates. Installed aboard the FSRU, Alpha’s coupling will be part of the pipeline that connects to the LNG carrier.

It features a two-stage operation that enables the controlled shutdown of internal valves (ESD1) and the coupling separation (ESD2) and can be operated mechanically or through an operator controlled separation.

The ERC can be specified with a pre-ESD1 alarm, which detects ship separation, and is linked to the ESD1 system to shut down flow lines. This safety feature complements the ERC’s innovative, inbuilt damping system to reduce the effects of pressure spikes should the coupling be called upon to separate during full flow transfer in the case of a separation event, such as a vessel drift-away. Alongside the development of the new ERC, Alpha Process Controls has also developed a new ‘Y-piece’ unit to improve flow rates and reduce pressure drops. Connected to a 16 in. manifold on the side of the delivery vessel, the ‘Y-piece’ splits the transfer through two 10 in. ERC couplings, which sit on a new double-saddle, which has also been designed by the company.

Part of the Knorr-Bremse Group-owned GT Group, Alpha Process Controls is a pioneer of Emergency Release Collar technology for couplings and has been at the forefront of the hazardous liquids transfer sector for more than 40 years.

From its base in North East England, the company designs, manufactures and installs the systems, along with loading arms and loading skids, which are supplied to its international client base that includes Shell, BP, Exxon and Saudi Aramco.

John Lamb, Managing Director of Alpha Process Controls, said: “The flexibility of new or converted FSRU vessels is bringing LNG to more locations across the world. This is requiring the development of systems that can ensure LNG transfer can be made to these floating storage terminals in a safe manner.

“A drift-away scenario would have a significant impact on terminal operations, most notably from the release of LNG, which would impact the environment and, at a temperature of -162°C, damage vessels and equipment.

“The mechanical operation of our new 10 in. ERC coupling, which is activated if a vessel moves away during transfer, prevents such a scenario, improving operational safety and security of the fuel.”

Read the article online at: https://www.lngindustry.com/floating-lng/22012018/alpha-process-controls-supports-frsu-lng-transfer-with-new-erc-coupling-technology/