Even though about a decade has passed since the rise in shale and tight gas production eliminated the need to expand LNG imports to the US, the first commercial export of LNG from the US lower 48 was not until February 2016, shortly after the first major crude export in 40 years. At current rates, the country will like be a net exporter of natural gas by 2018 and will be one of the largest LNG exporters in the world, rivalling countries like Australia and Qatar.

The rise of the US as a major natural gas exporter represents not only potential for production growth in the US shale sector, but also could dramatically change the energy outlook in the Atlantic basin, enabling more countries to turn to LNG supply, as Poland’s first commercial cargo expected by July will attest to. Furthermore, combined with additional capacity coming onstream in Australia, US LNG could provide the impetus for a structural shift in the global gas market.

In a recent report, ‘Five years on: The outlook and impact of American LNG Exports’, Deloitte looked at how its views of domestic natural gas markets have evolved and what that portends for the future. Looking back, it is hard to overstate how the sheer volume of economically-viable, recoverable resource in the US has impacted the LNG industry. This long, flat supply curve led to a cost-competitive export sector and contributed to lower energy prices.

Since the beginning of 2007, the total shale gas production grew from around 4.2 billion ft3/d to over 42. And in fact, since 2011, the US has exceeded its 1973 prior peak in production, and the current low prices have had only a modest negative impact on volumes, currently standing at 75 billion ft3/d . Ultimately the potential resource exceeds domestic demand, even with increased power generation consumption.

Part of that potential is being redirected towards LNG exports, with US liquefaction capacity set to grow from 10 million tpy capacity in 2016 to almost 75 million tpy, roughly 9.8 billion ft3/d, by 2020. Even with this large increase in the market for US gas, the flat supply curve means that Deloitte projects only marginal increases in the domestic price of natural gas, measured in the tens of cents if not less.

Though exports will have muted effects in the US, the global picture is much different. After several years of elevated prices driven both by tight supply and the impact of unforeseen incidents like Fukushima, the market has moved from famine to feast. So while the LNG cargo price drop in the short-term may have been driven by oil price indexation, the medium-term will be driven by more traditional supply and demand fundamentals. As Figure 1 and Figure 2 indicate, supply is expected to increase at a more rapid rate than demand, leading to an increase in excess liquefaction capacity. 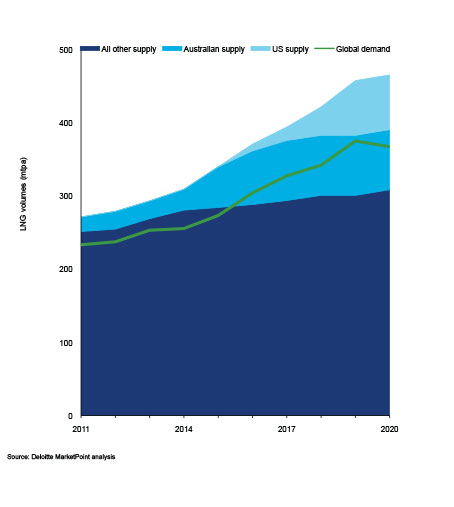 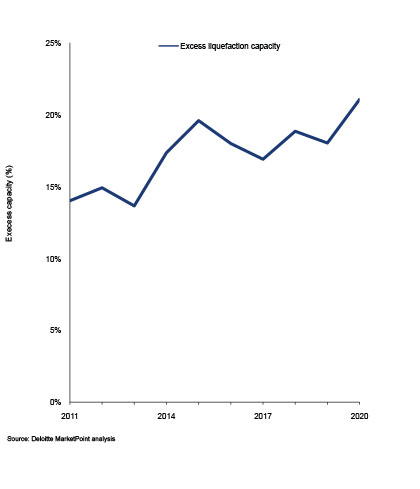 As supply continues to grow faster than demand, we are moving from the 2011 - 2015 seller’s market to a sustained buyer’s market. And while the benchmark price for oil indexed contracts has increased moderately over recent weeks, spot prices remain low. The volatility in both the oil and gas markets could mean buyers are holding long-term contracts with out of-the-money terms and potential opportunities for amendments and revisions, much like the Petronet and RasGas deal announced earlier this year.

Going forward, we expect excess capacity to remain elevated through the early 2020s, and it will weigh down pricing for new contracts as well as spot cargoes not to mention lead to the deferment or cancellation of many liquefaction projects. While liquefiers face challenges in sanctioning new projects, we expect demand to grow not just in the major importers, but also in markets currently lacking ready access to LNG.

Over the last five years four new exporters and five importers have entered the market, providing a measure of liquidity not seen in the LNG markets. With the number of potential routes increasing, the continued emergence of portfolio players and the outlook for contract revisions, there is opportunity for a more robust spot market to develop along with trading hubs and a narrower Atlantic-Pacific price differential.

Furthermore, flexibility from floating storage and regasification units (FSRUs), along with the interconnection system built-out over the last five years in Eastern Europe, has created new markets in a relatively short amount of time. Similar developments in both countries along the coast or abutting pipeline networks are likely if LNG prices remain lower. Additionally, as import infrastructure is expanded, the uptake of alternative vehicles like LNG-powered vessels and distributed natural gas power generation will increase. With countries around the world wanting to reduce pollution and carbon emissions, while improving energy availability and economic growth, the outlook for LNG in the long-term remains bright.