In January 2015, Karen Jacques, Director – Asia Pacific, Dryad Maritime, posted her view on the ‘then new’ International Maritime Organization (IMO) global regulation affecting ships operating within published Emission Control Areas (ECAs), which reduced the allowable emitted sulfur content from 1% to no more than 0.1%. As expected, additional regulations are continuing to follow and will do so throughout the next decade, with the most recent being the bid to reduce air pollutants from ocean going vessels (OGVs) within the confines of Hong Kong Port by the Regional Advisory Council on the Environment.

Smog is a common sight in Hong Kong and, as CNN reported at the end of 2013, polluted days had increased that year alone by 28% to 303 days. Of course, it would be easy to blame the factories deeper in land, however research indicates that up to 50% of pollution is actually locally produced. Gina McCarthy, US Environmental Protection Agency (EPA) Administrator, was quick to point out that much of it comes from marine vessels and emissions from shipping.

It is therefore understandable that the implementation of these regulations is being interpreted as baby steps towards shaping Asia as the pioneer for gas-fuelled ships. Indeed, Singapore already offers LNG bunkering and the Maritime and Port Authority of Singapore is currently backing a pilot programme to work out operational protocols by 2017. It is widely viewed by proponents of LNG bunkers that, in order to stay strategically important, the region must offer LNG bunkering.

In the English version of the Hong Kong Legislative Council Brief, released shortly after the initial formal announcement on 6 March 2015, the regulation was posed with the implementation date of 1 July 2015, and a promise of further details to be published in May 2015. Within this official document, reference was made to the likelihood of the new regulation affecting in the region of 30 000 vessels per year (based on 2012 statistics).

The Hong Kong local government bill is likely to require OGVs to switch to fuel with a maximum of 0.5% sulfur content while berthing and docked in Hong Kong Port until around 1 hr prior to departure. And, although it needs clarification, berth in this case is believed to mean “a place in the waters of Hong Kong at which a vessel is not underway”. The rules should therefore apply at anchor/buoys inside of port limits, which means it is not only container vessels that are in the frame. Fines in the region of HK$200 000 (approximately US$26 000) and a six-month imprisonment will be awarded for proven violations.

These strict emission regulations for shipping mean that clean-burning LNG is just one of the various options available to ship operators to combat exhaust emissions. The installation of devices such as exhaust gas scrubbers to clean up dirty emissions and low sulfur distillates are also considerations. However, despite doubts about LNG availability, cost, bunkering and re-training requirements, it appears that some owners are starting to invest in research projects and the new technology. If gas prices remain low and more gas ships are developed, the industry is likely to see a swifter transition to gas both in new builds and conversions.

And it may be worth it. Whereas the previous regulatory change enforced that heavy fuel has to be replaced with cleaner fuels such as marine diesel and marine gas oil with 0.1% sulfur content (which are both considerably more expensive), the Hong Kong regulation at 0.5% would appear to have a higher allowable sulfur content than the ECA and at berth regulations in Europe, which could give consideration to vessels holding three grades of fuel, or perhaps those just taking a financial hit by carrying two grades (0.1% for ECA and normal fuel oil for outside of ECAs). This has inherent problems for charter party and co-mingling, and a lack of bunker space could also arise, as well as the need for additional administration, bunker surveys and fuel analysis.

The regulation itself is also different in that the rules are applicable 1 hr after arrival to 1 hr before departure. This is different to the regular ECA ruling, where switchover must be complete and fuel run through before entry into an ECA, and again not switched back until after leaving an ECA.

As with the ECA regulations, there are no means by which the fuel oil sulfur content can be altered on board, other than on board blending, for which there are currently no guidelines. Consequently, it is necessary to ensure that the fuel oils loaded meet the required limits and, in the case of the ECA compliant fuel oils, that compliance is not compromised by mixing with higher sulfur fuel oils either in bunker tanks or in the transfer system. There are complications associated with dual storage; to cater for the storage of different grades of bunkers on board, and, as with ECA management, there will likely be a requirement for a sub-division of tanks and possibly the need for more frequent bunkering resulting in additional costs.

To add to the expense, there is already talk of the possibility of levies and surcharges placed on customers by international shipping lines to counter these additional costs for vessels calling at Hong Kong port, and the inevitable raised cost of shipping containers through the city. There are also concerns locally of a loss of some shipping lines to neighbouring ports and worries that Hong Kong could struggle to stay competitive with further calls for subsidies akin to those offered by Shenzen Port for emission reduction measures, totalling in excess of 300 million dollars last year. 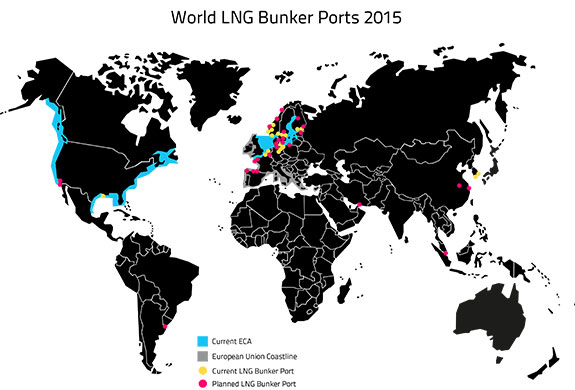 These additional potential costs for shipping are putting pressure on shipowners to make some long-term and important decisions. In Asia, LNG is three times the price charged in the US and twice that in Europe, but it is the price advantage of LNG over low sulfur diesel fuels that brings its profile to the fore, as it is the only qualifying fuel alternative to LNG (except nuclear) to achieve the required sulfur levels post 2020. Yet, until the LNG bunker market becomes better established and financially supported, the ‘switch’ will remain difficult for many, in particular the smaller companies. Although LNG bunkering is currently offered in 46 global key ports with more planned (according to Tri-Zen), two-thirds of these are in Europe. Moreoever, this is only a very small percentage of the 8000 ports open to trade globally. More strategic bunker stations are required around the world to service the main liner routes and make the transition to LNG as a wholly viable alternative.

Above technological challenges, focus also needs to switch to the rules and regulations that will govern custody transfer of LNG to manage excess boil-off gas (BOG). The IMO is currently completing the International Code of Safety for Ships Using Gases or Other Low Flashpoint Fuels (IGF Code) however unfortunately, discussions of the IMO Sub-committee on Bulk Liquids and Gases (BLG) held in February 2013 were not satisfactory, and the code is not expected to enter into force before 2016.

So, what is the impact of this additional regulation on the shipping community?

As with the new IMO regulations, this space remains one to watch. Although it appears unlikely that Asian governments are likely to declare their territorial waters as full ECAs any time soon, rumours are rife that local regulations similar to those in Hong Kong are planned for the green berths in Singapore’s Jurong Port. In fact, the Green Ship/Green Port Programme in Singapore is already rewarding 15% reductions in port dues for vessels that can demonstrate emissions at less than 0.1% sulfur.

It is a commonly held belief that ECAs will continue to proliferate into the future, although the process may be slow and the decisions regional. However, as long as the respective infrastructure is driven forwards and supported, LNG as a wholly viable alternative ship fuel is coming, and the new regulations emerging in the Asia region could potentially be the springboard for Asia to take the helm.

Read the article online at: https://www.lngindustry.com/special-reports/04062015/dryad-maritime-on-lng-bunkering-progress/

Tellurian has named Octávio Simões as President and CEO, and Jonathan Gross and Jean Abiteboul as new independent Board members.